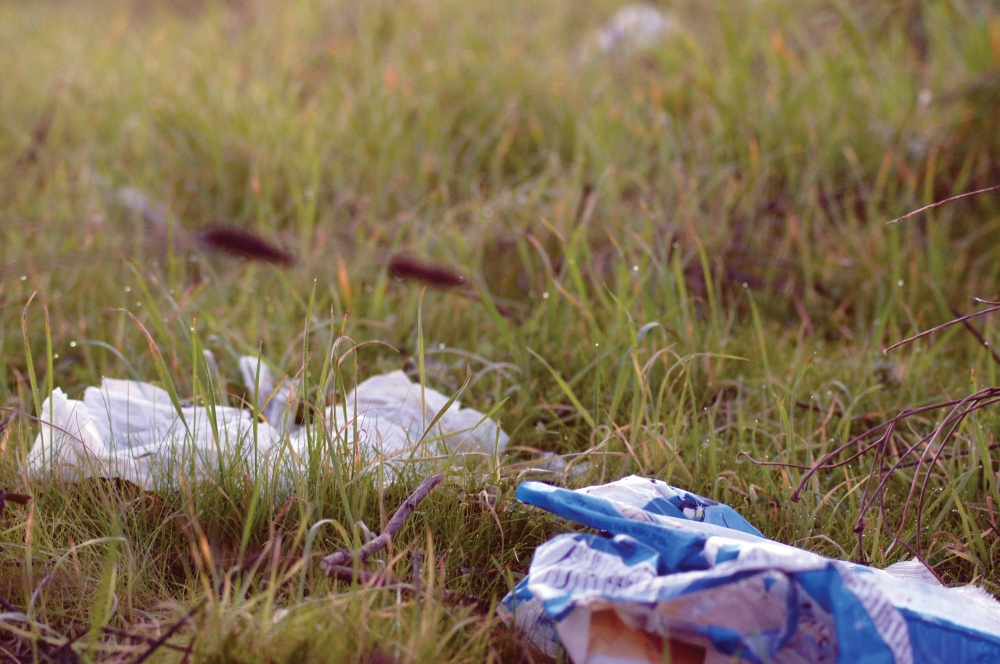 The plastic bags people use to line their garbage cans, hold their dogs’ waste and litter the ground everywhere might soon be banned in Santa Cruz County. Photo by Nick Paris.

The city and county of Santa Cruz are grappling with a major policy change intended to curtail damage to the environment and preserve the beauty and health of local beaches.

If enacted, the ban would prohibit the use of plastic bags. A 10-cent fee on paper bags is part of the proposal.

Since plastic bags often find their way to the oceans, many consider the policy essential for the preservation of the Monterey Bay.

The Santa Cruz County Board of Supervisors reviewed the proposed ordinance in an April 2010 meeting. AB 1998, a comparable measure, failed on the state level in August.

The magnitude of environmental damage due to plastics has caught the attention of many governing bodies. However, newly elected city council member and UCSC alumna Hilary Bryant said the policy faces obstacles.

“In the past, the ban has failed not because of the lack of broad-based popular support but because of strong lobbying on the state level,” Bryant said.

Of those opposed to the bill, the American Chemistry Council garnered the public’s attention with radio and television ads against the state ban. A Virginia-based company, the ACC represents plastic bag manufacturers, including ExxonMobil.

All three recently elected city council members support the ban, saying they would support it on a statewide level as well. City council-member David Terrazas said Santa Cruz is obligated to deal with the plastic problem.

“As a coastal community, we have a responsibility to find a solution,” he said.

Because statewide Proposition 26 passed, the ordinance must be revised or passed with two-thirds of a local vote. City council member Lynn Robinson said a statewide measure would be beneficial. However, she forsees potential problems with the policy language in its compliance with Proposition 26.

“Local municipalities can’t afford to get sued,” Robinson said. “Before you put a policy forward you need to make sure it works.”

“A statewide consistent effort would have a larger impact and would be easier to implement because of its uniformity,” she said.

Some countries and municipalities have enacted similar policies already. South Africa, Ireland and China have implemented fees or bans on plastic bags. While no U.S. state has passed a ban, the municipalities of San Francisco, Palo Alto and Malibu have passed such ordinances.

Opponents of the ban point to economic reasons. Businesses will be affected by the demand for alternative methods of transporting their products. Taquerias, Chinese take-out restaurants and supermarkets are among those affected. Council member Robinson said this is a major difficulty with the policy.

“The biggest challenge is how it does affect the businesses,” she said. “People want to do the right thing, but you have to do it in a way that doesn’t make it more difficult for the small businesses to do the work they need to do.”

In Santa Cruz, some vendors have already switched from plastic to paper. New Leaf Community Market, for example, only provides paper bags.

They encourage customers to bring in reusable bags by donating to local sustainable organizations with each bag filled. Council member Bryant supports such community efforts.

“I would be in favor of bans on the use of plastic bags to be voluntarily implemented by local residents and businesses regardless of when or if a state or local legislative ban is passed,” she said.