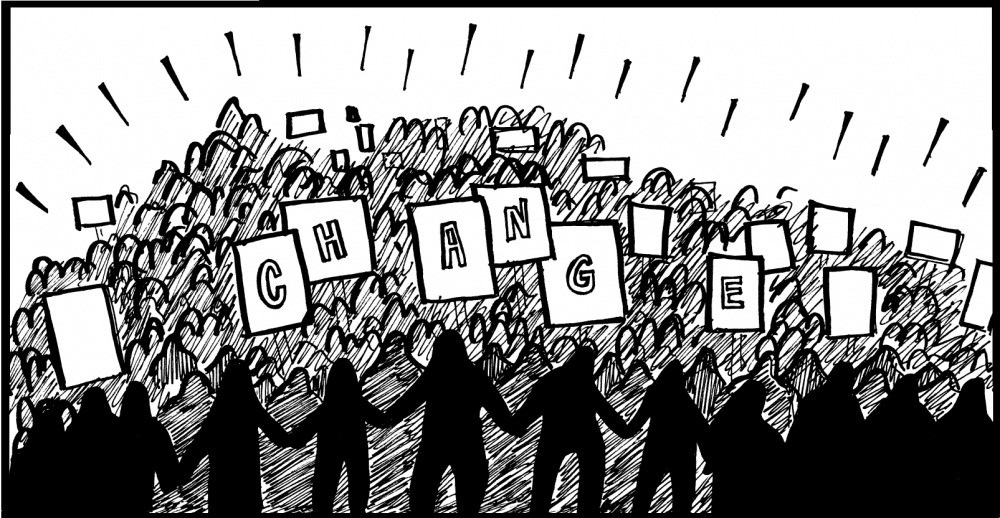 Rallies and Protests Face the Hurdle of Apathy

When it comes to protesting in Santa Cruz, James Christianson knows that things just aren’t what they used to be.

Christianson wears the ’60s revolution well with his grizzled complexion, wild grown-out hair and colorful vintage style. As a Santa Cruz resident for over four decades and an American studies lecturer at UCSC, he has witnessed political activism at its peak, and he now watches students struggle to get their voices heard.

“There’s different little groups that are doing wonderful work as far as activism’s concerned, but they’re kind of isolated,” Christianson said. “It’s not a massive organization with many people, a movement. There’s a general apathy that you see throughout the country.”

Santa Cruz’s tie-dyed footsteps of the town’s so-called defining era, the ’60s and ’70s, have been washed away with new-wave rallying.

Activism has evolved from the hippie-esque, with campus support becoming harder and harder to win over.

While the Vietnam War and the education crisis are completely separate issues, each demands a movement to achieve change.

In 1970, students burned draft-cards at the Quarry Plaza, the same place where some students now stroll past rallies against fee hikes. Today, classes are canceled in community and American studies due to budget cuts, but in 1970 spring quarter classes were canceled or reorganized to focus on Vietnam War issues.

“What we’re talking about is numbers,” Christianson said. “To be able to marshal lots of people to come together on these kinds of issues … To get a large representative of the student population to be out there … to put their ass on the line and make a righteous hue and cry about injustice, about bullshit, about corruption.”

Last year on March 4, an organized strike against the education crisis attracted enough protesters to shut down three UCSC entrances. Sustaining this passion is the strike committee’s toughest challenge.

“Once Kerr Hall, and then what?” said fourth-year Leo Ritz-Barr, a politics major and strike organizer. “How do you get bigger than Kerr Hall? We shut down the campus for a day. Then what? What is the most effective message?”

Since the occupation of Kerr Hall and the March 4 protests, students and workers have gone from large-scale action to the incremental approach of rallies in hopes of spreading awareness about UC issues. The campus demonstrations of the 2009-10 school year were, if anything, large in student numbers. But this year’s informative rallies suffer from low student turnout. Student apathy is a threat event organizers face year-round, with the main question being: Why don’t students show up?

Christianson attributes UCSC’s smaller rallies to issues that are harder to pinpoint. He spent the ’60s and ’70s in California, when the counter-cultural aspect of Santa Cruz drove change.

“You get the [turnout] numbers ‘back in the day’ because things were more clearly defined,” Christianson said. “The Vietnam war was much more clear. [It was about] civil rights. The black movement. The women’s movement. Free speech movements. Students for a democratic society. Things were more compellingly defined. [Now], there’s a malaise and abstractness about it.”

The activism that Christianson refers to such as the women’s movement brought on 700 signatures in 1972 from students petitioning to form a women’s studies program at UCSC. In 1981, the only instructor teaching Native American studies was dismissed, and 600 people marched to the chancellor’s office in response, insisting their demands be met in five days. Today, despite activist efforts, a similar humanities major, American studies, has been suspended.

Today, rallies that are large in numbers usually happen during March protest week, petering out during the remainder of the year.

American Federation of State, County and Municipal Employees (AFSCME) interns like Victoria Salgado try to lessen this apathy by organizing the efforts of students and workers. Salgado is a second-year sociology, Latino studies and art major whose job is to spread awareness of union issues to students and engage them in sustaining UCSC’s student-worker front.

“It’s true — it’s like you build it up for one day and then you just disperse,” Salgado said. “So how can you keep that flow of things? I can’t really explain it to you, because I myself don’t know how to do that.”

Some UCSC workers have also noticed the lack of campus presence at rallies.

Nicholas Gutierrez is a dining hall worker at College 9. He became active in the worker’s union seven years ago. He participates in fighting for student-worker rights, but he says often five to 10 workers show up at rallies and event organization meetings.

“… There’s a huge, huge percentage of students that don’t support, or they just turn the other way or they just don’t care,” Gutierrez said. “And I’ve always wondered why, because when student fees go up, it affects everyone.”

On Oct. 7, 2010, 200 demonstrators appeared at the bookstore. In November 2009, about 150 students occupied Kerr Hall overnight. In March 2010, students shut down the campus starting at 6 a.m. Students and workers continue to spread awareness, but turnout has changed along with the tactics.

“One of the most effective ways of getting people out is disrupting large lecture halls,” he said. “You’ve got 500 kids sitting in a GE that they don’t want to be in, and you give them an option to go do something cool.”

Noah Miska is a student active in organizing rally events. He organized the March 1, 2011 event, in which around 500 students spelled out “Free education” with their bodies in an attempt to direct people toward calmer, less agitated discussions about campus issues.

“You can’t get very far by just pointing out what’s wrong, by protesting,” Miska said. “I think you need to lead by example and try to create the world that you want to see, which is exactly what I’m trying to do on March 1 with the small discussion groups that will be happening.”

Miska’s approach coincides with that of the smaller rallies organized earlier this year. These events may not be bold enough to shut down campus entrances like March 4 of last year, but their goal is to continue to create an effective dialogue about issues like fee hikes and major cuts.

“It’s important to always say what you think is right and it can be really powerful with a group of people, but at the same time … the louder you shout, the easier you are to ignore,” Miska said. “People pay more attention to someone whispering carefully chosen words than shouting everything. Shouting has a place, but shouting isn’t great for constructive dialogue, which is exactly what we need right now.”

Rally strategies have varied from dressing up as zombies to puppets and pie-eating skits. Small rallies assist strike organizers in diversifying their efforts, student apathy is still a concern.

“[Some workers] just don’t care,” Salgado said. “Again, it’s like students — they’re just very individualistic. It’s, like, screw the rest — I only care about me.”

But Salgado added that campus activism has worked when students and workers formed a united front.

“I know that a lot of the protests that have happened in the past have had effects … [like] the new contract for AFSCME workers, and the workers won,” Salgado said. “They won that contract because of the protesting. And if you speak to the workers, they will say that themselves too, that it was the students that helped them out. So it definitely does work. It’s just a matter of getting it organized.”

Last year, Salgado was not active in protests or rallies. Now she tries to convince inactive students that there is a reason to get up and do something.

“Last year it was just me in my apartment with my roommates just there, hanging out,” she said. “And I remember all of the chaos with the rallies, and I was very pessimistic. Like, what’s the point? Because honestly, it’s very difficult to actually make change, like with one rally.”

After getting over her pessimism, Salgado decided to join the rally efforts, persuading students to let go of the apathy that she once had.

“Towards the end of last year I was really frustrated with doing nothing,” Salgado said. “I kind of realized you can complain, and you can sit and not do anything about it, but you might as well channel your energy into something. So, that’s what I’m trying to do right now. Some people can say I’m not really doing anything, or what I’m doing isn’t going to amount to anything, but at least I’m trying.”

Now, Salgado faces the challenge of speaking to students who do not usually get involved in activism.

“It’s easy to get involvement with people who are active in the community but it’s really difficult to get [involvement] with regular students,” she said. “It’s difficult to even talk to them about it and get them interested in everything, because they just kind of shrug it off.”

A larger student effort is not the only problem. More UCSC workers are needed at rally events, and organizing them can be even more challenging than organizing students.

“Sometimes we have rallies on location, and there’s not a big turnout, and people kind of wait until it really counts and then they show up,” he said. “I tell them we should show up at every rally because I’ve noticed that there’s 3-to-1, sometimes 4-to-1 students versus workers, and that doesn’t look good, because the university sees that.”

Gutierrez said workers often have children or parents to take care of after work, and dining hall workers can’t leave the busy lunch shift for noon rallies. He said, many are nervous about speaking in front of crowds or do not speak English fluently.

“Even when we come to these meetings, it’s the same group of five to 10 workers always coming to this meeting,” he said. “This is why I say it’s that laziness thing we need to work out. I think for us, that’s our biggest problem: getting people off their butt.”

Psychology associate professor Regina Langhout said that the way issues are presented today makes it challenging for students to become involved. Langhout is a member of the Faculty Organizing Group (FOG), which opposes the privatization of public higher education.

“I don’t think students are apathetic,” she said. “Instead, they are pulled in many directions, including having work and family responsibilities. Many people — including students — feel overwhelmed. When we re-frame the issue, the possible solutions change.”

Ritz-Barr reluctantly described the strategy of this past year’s rallies as “cautious”. After the diplomas of some students accused of participating in the Kerr Hall occupation were withheld and other students were fined, the threat of authorities lingers.

Lack of student support can also take the passion out of activism. Ritz-Barr, a fourth-year strike organizer, paraphrased letters from students who did not support the protests of last year.

“My day was interrupted by the students marching through the center of the intersection, and it took me three hours to get to class,” Ritz-Barr read. “They should be punished to the fullest extent of the student conduct and be kicked out of school.”

Christianson, a UCSC lecturer, relayed how the need for students that go out on limb for a cause, or “adventurists,” as Fitz-Barr calls them, is the main issue.

“There’s plenty to be outraged about. At least as much as they had back [in the ’60s and ’70s],” Christianson said. “It’s just how do you stir up, organize, drive people to commit, and then sustain it? Not just for a one day kind of gesture, because the people in power are willing to let you have that. Because they’re patronizing they think the students are children. ‘Let them have their day. They’ll be back in class tomorrow.’ And sure enough, they’re right.”