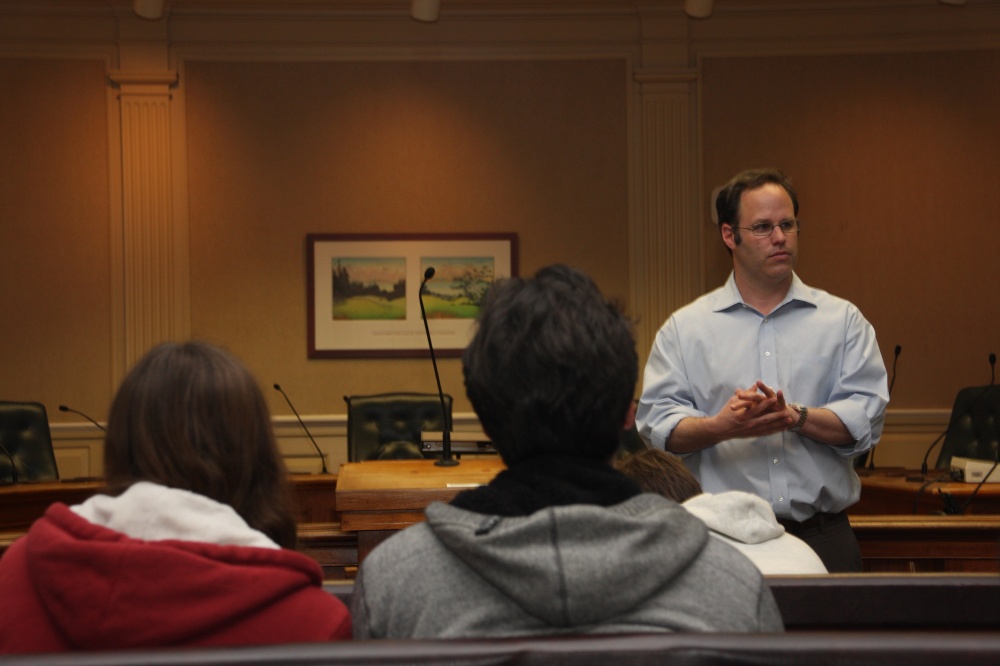 Mayor Ryan Coonerty discusses what Santa Cruz is doing well and what citizens can do better during his first “Mayor’s Academy,” a class aimed at educating citizens on how the government works. Photo by Toby Silverman

“I want to make sure that [community members’] questions or concerns about the city are answered,” Coonerty said. “I want to give them a good sense about how accessible government is.”

The class, known as the Mayor’s Academy, will take place three more times, once a month until July. Classes are open to the public and will run from 7 to 9 p.m.

Coonerty said the class is the first of its kind. Mayor’s Academy aims to educate the public, Coonerty said, and it is not going to be a place for him to share his personal political views. Rather, through a better understanding of the way city government works, the community can partake in a more informed discussion.

“I believe in the idea of sitting down and having a longer, deeper conversation and providing the context and complexities of an issue,” Coonerty said. “It’s not always clear to the average person what the issues are or how to get engaged, and the more outreach we can do, the better.”

Approximately a dozen people attended the first meeting last week. Coonerty said he was “extremely happy” with the turnout.

“The tone of the conversation was much better than it often is around public debates,” Coonerty said. “It was very gratifying.”

Topics discussed included the budget and tax systems, crime and the desalination plant.

David Sweet, a retired UCSC faculty member who attended the event, said he was satisfied with the lecture overall.

“The whole idea that the mayor would take time to invite people to come and have a civil, informative talk on how the city works is beneficial,” Sweet said. “Just imagine if the president were doing this. If we were in the habit [as a country] of having this ongoing civics lesson, I think we’d be much better off as people.”

Before the mayor’s presentation, Sweet said he was unaware of some of the programs the city had, like the Chronic Inebriates Program, which aims to prioritize rehabilitation over jail time.

Vivian Vargas, Latino Affairs Commission member, suggested at the meeting future events be televised for accessibility. She also suggested televised lectures be dubbed in Spanish. Coonerty said this sounded like a “good idea” and it would “be worth it to have the [county’s Spanish] translator” attend.

“There was a [county] survey done to better reach the Latino community and they found that the best way to reach them was through television,” Vargas said. “That worked more than newspapers.”

The tone of the lecture was informal, and Coonerty joked about his day-to-day experiences, from campaigning to making citizen’s arrests.

Coonerty has extended his outreach to high schools in the Santa Cruz area. Mayors nationwide partnered with Harvard University to speak at local schools about city government. Coonerty has visited nine schools and said he intends to go to four more before the end of the year.

“I enjoyed going and talking to students so I’ve continued doing it,” Coonerty said. “I’ve really found their insights into the city to be extremely valuable.”