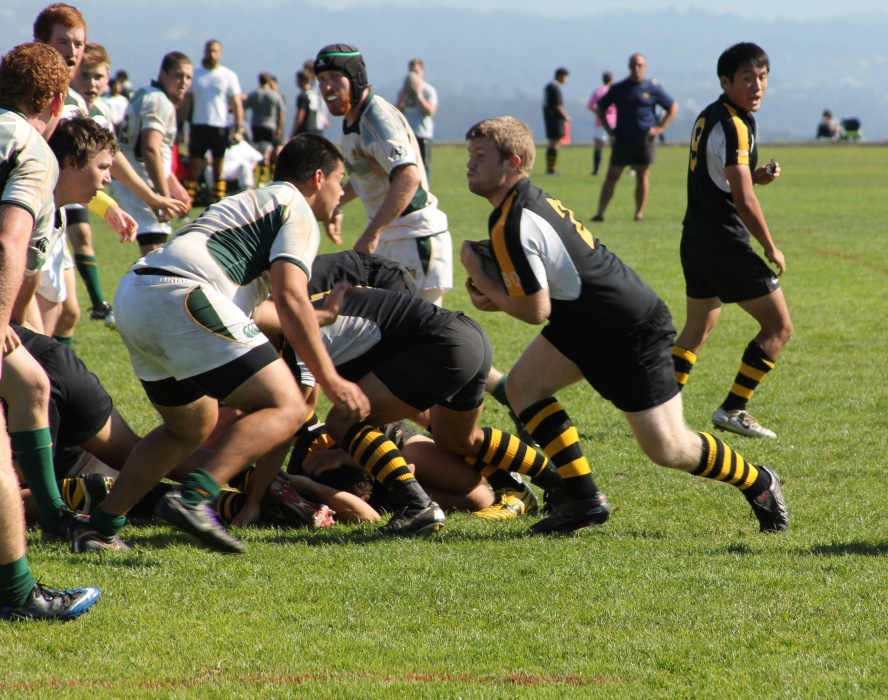 The tournament was held in rememberance of former UCSC rugby player Ben Quaye, a senior wingback who was found dead due to severe head trauma along Almar Avenue in February of 2010.

Out of a total of six matches UCSC lost five, with the lone win against Cal Poly. UCSC’s rookie team and veteran team alternated matches throughout the day. Coach Jeremy Sanford felt the slugs had not given enough energy on the field to win; In a post-game huddle Sanford addressed both rookies and veterans with encouragement.

“We’ve got to go tooth and nail at all times,” Sanford said.

Freshman inside center Alec Saucedo dislocated his ankle and was off the field for 20 minutes.

Saucedo’s teammates were visibly shaken by his injury. After the tournament, many of the rugby players had a conversation over whether Saucedo would return from injury to play again. Jonny “Tsunami” Lim, a freshman outside center, spoke highly of Saucedo’s character.

“Alec is a good teammate,” Lim said. “He’s always joking around, but in practice he’s intense.”

“There were more injuries than expected,” he said. “Thankfully I needed to do fewer preventative measures than expected. San Jose State brought some guys to help me.”

For the rookie team, composed of first-season players, rugby is tough to master. Junior winger Graham Churchill said the complexity of rugby’s strategy was especially difficult to grasp.

“Rugby is like a chess game because the strategy is dynamic,” he said. “If we don’t interlock and find each other, we lose the game.”

Churchill noted communication in rugby is key. He felt he was calling plays he was uncomfortable with calling from his position as a winger. In rugby, the player who plays in the center of the field, the fly half, is the play-calling leader on the field.

“It was a little like chaos out there,” Churchill said. “I shouldn’t be yelling out plays. People need to listen to the fly half so we know what to do.”

Freshman lock Noah Stid felt he needed more conditioning. He described himself as tired, having played three games that day. Churchill said he felt he needed to start tackling better.

“I want to hit tackles running,” Churchill said. “I let them [the opposing team] come to me. It’s a rookie mistake.”

The Ben Quaye Memorial Collegiate Tournament also featured awards, given to the most outstanding off-the-field player and to the best rookie player. Jo Witt of SFSU took home the most outstanding off the field award, which depicts exemplary sportsmanship, while UCSC’s own Noah Stid was recognized as the best rookie of the tournament. Stid was shocked when he won the award.

“I didn’t think I would win,” Stid said. “I was really tired in the third game.”

Despite the day’s injuries and losses, team coach Sanford is optimistic the team’s prospects this season.

“Everything needs to be tightened up,” Sanford said. “With so many new players, we’re just getting started. It’s fun. We have a lot of potential.”

The UC Santa Cruz club rugby team will play CSUMB at home on Saturday at 1 p.m.