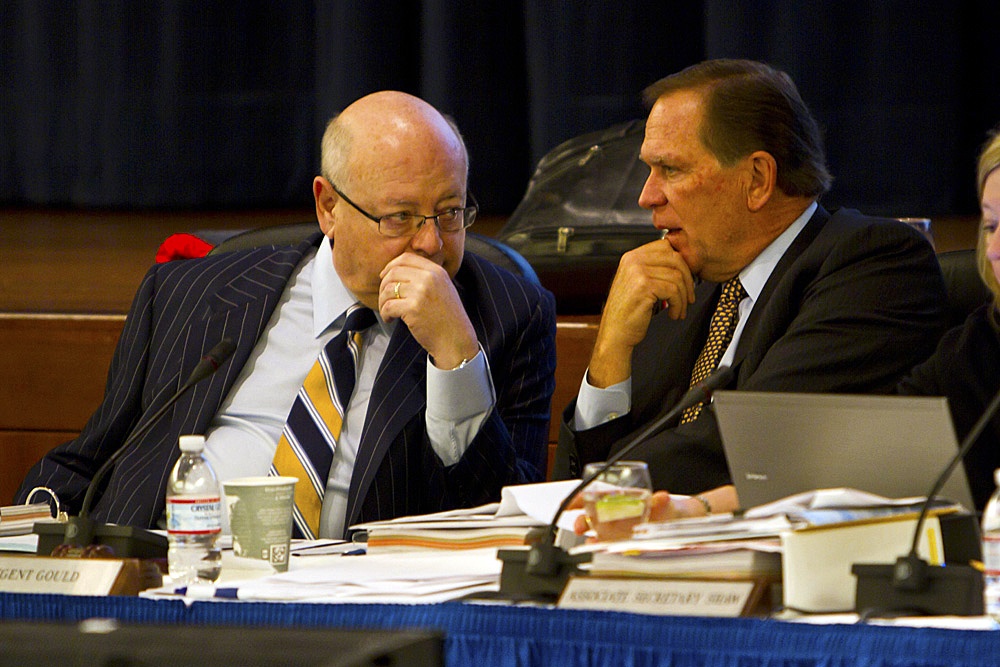 President of the University of California Mark Yudof talks with the Chair of the Board of Regents, Russel Gould, about the decentralization of funding at UC campuses. Currently, funding at each campus is given directly to the University of California Office of the President (UCOP), and is then dispensed among the 10 campuses and other UC facilities. Decentralization would mean campuses would retain the funding they generate and pay a tax to UCOP.

UC Office of the President (UCOP) announced the cancellation of this week’s regents meeting, due to “credible intelligence” collected by University of California law enforcement officials last week of threats of violence. The cancellation comes just two days before the Nov. 16 UC Board of Regents meeting was to be held in San Francisco at the UCSF Mission Bay campus.

University of California Police Department officials said there was a “real danger of significant violence and vandalism,” and advised the regents to cancel or postpone the meeting. In a Nov. 14 UCOP press release from Sherry Lansing, chair of the board of regents, Vice Chair Bruce Varner and President Mark G. Yudof, Lansing cited as the reason for cancellation information received by the board from the UCPD warning those present at the meeting could be subjected to violence.

“(UCPD) have advised us further that this violence could place at risk members of the public, students lawfully gathered to voice concerns over tuition levels and any other issues, the UCSF community,” Lansing said in the release. “After further consultation with these law enforcement officers, we have decided that, in fact, the most prudent course for us would be to postpone this meeting and reschedule it for another time and, possibly, an alternate venue.”

In a Nov. 14 release the University of California Student Association (UCSA) said UC students “are strongly opposed to this decision.”

“The decision to cancel this week’s regents meeting came abruptly and without any consultation with students or other stakeholders. We do understand the concerns about public safety, yet the regents also have a responsibility to the students and people of California to hold open meetings that allow for public access and participation,” said UCSA President Claudia Magana in the release. “It is concerning that the UC regents and UCPD were not properly prepared for this meeting, given the ‘credible intelligence’ that was gathered. UCPD deals with student demonstrations on a regular basis, and their top priority should be ensuring student’s ability to demonstrate safely. By cancelling this meeting, the UC regents have done a great disservice to students, and our ability to participate in the governance of our University system.”

A TA from UAW local 2865 — the union representing UC teaching assistants that chartered seven buses to take representatives from UC Santa Cruz to the meeting — questioned which body would be inflicting violence and how this reflects on the regents’ reaction.

“It seems that given the way regents meetings have gone in the past, the only credible threat I can imagine, would be coming from UCPD,” said a TA from UAW who is an active coordinator of bus transportation to UCSF and who wished to remain anonymous. “This just shows how out of touch the regents are with the student movement.”

Despite the abrupt cancellation, UAW’s current consensus is to push ahead with an “alternative action” rather than abandoning student action for that day.

Lansing’s statement goes on to emphasize that tuition hikes were not on the meeting’s agenda, and a new schedule for the meeting will be provided as soon as possible.

“The UC regents need to stand with us, not run away,” said Magana in the UCSA release. “In order to fully fund education, the state needs new revenue, and our UC regents should support this goal. This is all that students wanted to hear this week from the UC regents.”