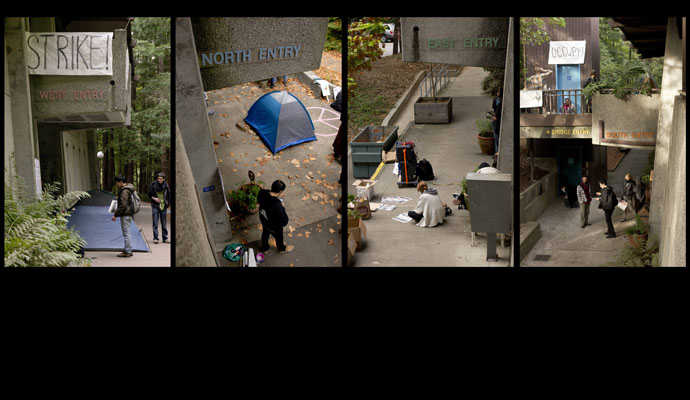 Hahn Shut Down at Dawn

Picketers surrounded Hahn Student Services building at 5:30 a.m. on Monday, Nov. 28, in conjunction with a rally at Quarry Plaza to be held that afternoon. They aimed to shut the building down and prevent people from going to work.

A small initial group of organizers were quickly joined by more protesters, growing from 20 to near 100 in half an hour.

Dividing to stand in front of each entrance into Hahn, picketers held signs protesting cuts to education and fee increases. Several donned bandanas as well as swatches of iridescent cloth to denote their support of the students at UC Davis. By 6 a.m, they erected three tents in front of the south, east and second-story entrances.

“This is the place where people come to write their checks to this entity called ‘The Board of Regents,’’’ Hanson said. “We chose this building for various reasons—some tactical and some legal. The people who work inside this building are not our enemies, but we have to disrupt the system.”

Scott explained Hahn employees had not been instructed to abstain from coming to work that day, and would instead be deferred to the Bay Tree Bookstore after arriving at the building. She noted the building was considered “occupied,” and asked for cooperation to avoid confrontation.

Around noon, protesters used Quarry Plaza as a forum of discussion about fellow occupations’ hardships, most notably the action taken against UCD students on Nov. 18.

UCD second-year Kitty Bolte, who is studying agriculture at UC Santa Cruz, announced a message from UC Davis at the rally.

“We’re all one campus,” Bolte said. “We’re the same student population, all fighting the same struggle.”

In preparation for her rally message, Bolte called friends at UCD, who talked to UCD Occupy.

“For Davis, we’re just getting started,” Bolte said. “Everyone is waking up and we’re not backing down … before this, Davis was an apathetic campus, and now a tenth of the campus is coming out.”

The rally saw approximately 300 people, but the turnout wasn’t reflective of what third-year Mark Goodman expected to see.

“Before break, the protest was way bigger,” Goodman said. “When they marched to the bottom of campus it looked much larger than it does today. There is a good chance it’s because people are still home for vacation.”

Sociology professor Herman Grey did not view the size of the rally as important as its meaning.

“This action is great,” Grey said. “You can’t judge it by numbers because the message is being sent. If it’s on the students’ minds, they are making an impact. The fact that this place is given to this kind of discussion shows what’s on students’ minds. Size as an index won’t change why the protest matters.”

Various campus officials were also present at the protest, monitoring the progression of the discussion and agenda demands.

Alison Galloway, campus provost and executive vice chancellor, agreed there should be changes around various campuses, but some demands wouldn’t be in the interest of the students.

UCSC chief of police Nader Oweis discussed the use of force.

Though the need for greater student physical safety was a counterargument to the deconstruction of UCPD, other staff regarded this as a subtext to the potential of a larger reconstruction.

Susan Gillman, senate chair and literature professor, said there was an “implicit hierarchy” in the UC system.

“Most of the UC campuses believe in 10 UC campuses, one university,” Gillman said. “We’re all basically in the same boat. The budget is the great equalizer. We need to reevaluate our efforts for equal per-student funding to all UC campuses.”

While discussion contined throughout the crowd, the rally ended at 1:45 p.m., followed by a  general assembly. Students seated themselves to discuss the future goals of the movement, as well as vote on the continued support of the closure of Hahn Student Services.