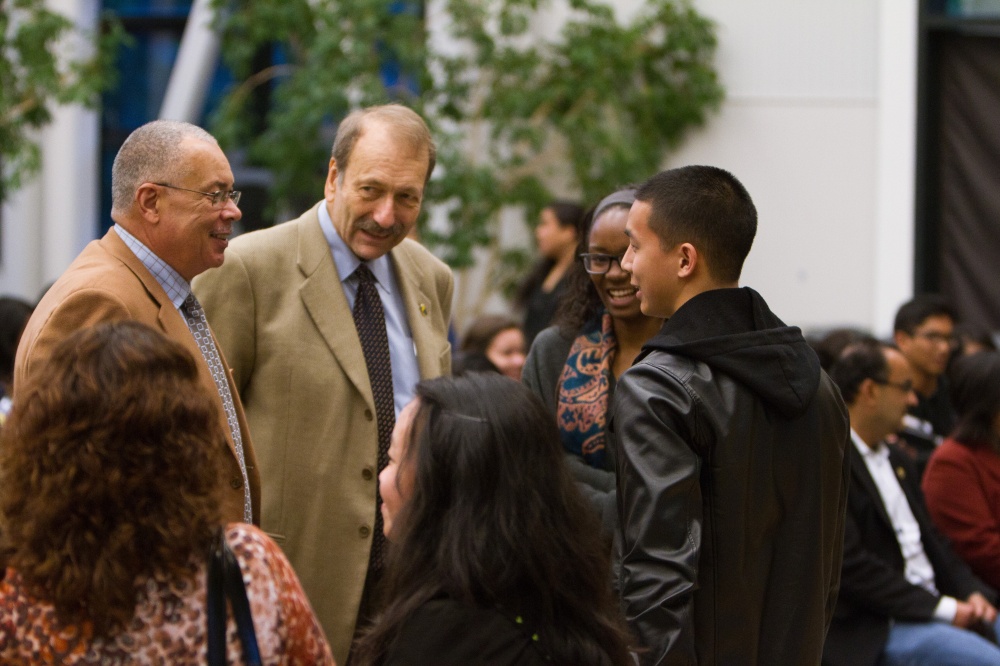 Correction: SOAR (Student Organization Advising & Resources) and UC Santa Cruz’s colleges do not provide funding for ASF, DHE and ORALE (programs, not student groups as originally printed). Measure 15 (printed originally as Measure 10) does, and the Chancellor matches that amount each year. Additionally, Engaging Education houses these programs, which are entirely student run and initiated from such ethnic student organizations as MEChA, FSA and ABSA. These organizations work closely with the student coordinators and, in collaboration with Engaging Education, put on these three outreach programs. Engaging Education also provides them with funding and the space to organize and put on these events. Also, City on a Hill Press has replaced the term “minority” with the more correct term “underrepresented.”

From Southern and Northern California alike, newly admitted high-school seniors embarked on an all expenses paid weekend trip to Santa Cruz that began on April 12 and lasted through April 14.

SIO brought students of underrepresented backgrounds together in an effort to demonstrate that UCSC offers a community for students of all backgrounds.

Student Initiated Outreach is open to all prospective first-years, offering “programs that have been created by UC Santa Cruz students in order to introduce interested admitted students to the campus,” according to the UCSC undergraduate admissions website.

The proportion of admitted Chicano/Latino students in the UC system also increased from 26 percent to 27.3 percent. In 2008, students of underrepresented groups made up less than 30 percent of degree holders in the United States.

“We try to deal with diversity issues,” said Alfredo Mireles, former SIO guest speaker and UC student regent. “We deal with these issues through changing the admissions policy or other things at the regent level, but it doesn’t even scratch the surface compared to how effective events like these are to make sure students of underrepresented communities come to a campus like UC Santa Cruz.”

“We’re a small percentage who have made it to this institution and we have the privilege of choice to come here,” Sanchez said.

ORALE, which translates as “heading to the education opportunities,” represents the Latino/Latina and Chicano/Chicana community on campus. Coordinator for ORALE Fatima Galvez organized transportation for the 65 ORALE high-school students who attended SIO with the hope of attracting students to UCSC.

“It would be great if students decided to come to UCSC,” Galvez said. “But mostly, I want them to believe they can do it, I want students to know they can go to a college like [UCSC].”

A collaborative effort made by student groups, volunteers and guest speakers alike, organizers hosted the event with the hope that the program would not only attract students of underrepresented communities to attend UCSC, but encourage them to seek empowerment from the inside and pursue higher education with the unity and support of their peers.

As students stood, Jacquinto asked students to understand that they needed to help form a supportive community for themselves and one another.