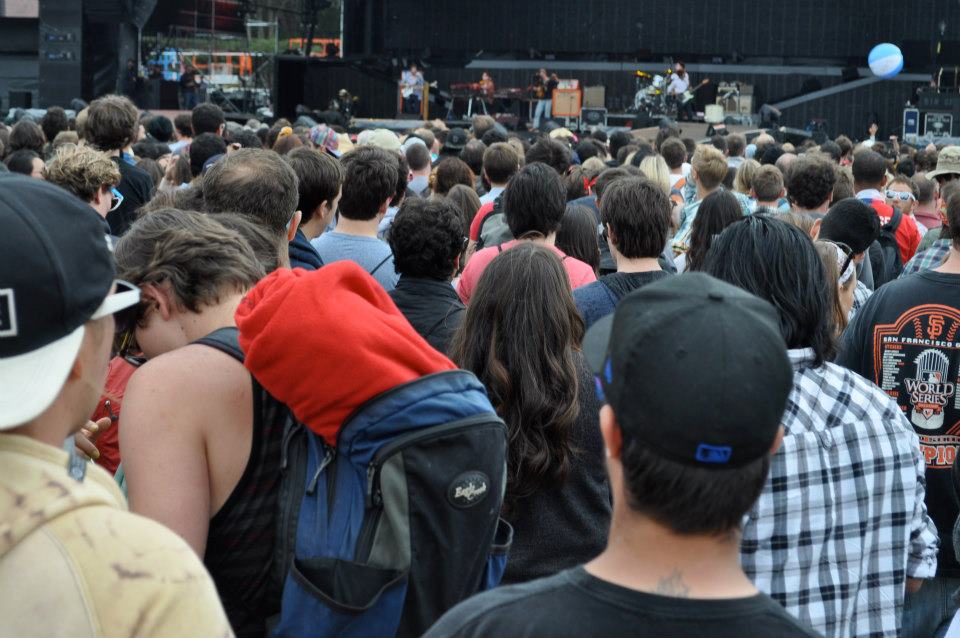 Three Days of Music, Some Peace

Like most of my columns, I’m writing this one in my pajamas.

This time, I have somewhat of an excuse. I just got back from Outside Lands — a five-year-old summer music festival at Golden Gate Park in San Francisco that boasted big names and an even better ambiance — and I’m still a bit exhausted.

The first act I was really excited about seeing played Saturday afternoon. Explosions in the Sky, a stellar all-instrumental band was well worth risking a bit of crowd anxiety in order to be near the stage.

Turns out that crowd anxiety was right on point, for once. What started out as a verbal dispute over appropriate crowd surfing etiquette between two people right next to me quickly escalated into shoves and punches, and soon random bystanders were joining in.

“Stop fighting,” yelled a tall woman with a flower in her hair. “This is fucking San Francisco!”

Amen, I thought. But in hindsight, that probably wasn’t even the most unsettling part of the weekend.

A lot of people bussed it from Golden Gate Park back downtown at the end of each day’s festivities. Buses came and left every seven minutes, but at this point in the evening nobody was too keen on politely filing up and waiting their turn. The crowd formed a swaying mass that lunged toward the open bus doors, everyone pushing those in front of them forward so that their part of the throng could make their way on.

The crowd on the bus was ruthless, everyone regarding each other as either a means or an obstacle to their own end. It was reminiscent of the fight I’d witnessed earlier, but way more intense because as UC Santa Cruz students know, when you’re trying to get on a bus, anything goes.

Regardless of these few hiccups on Saturday, Sunday was incredible. A bunch of acts I loved all performed one right after another, all on the same stage, with Regina Spektor’s midday performance being my own personal favorite.

Spektor is quirky and emotional and, to put it simply, not for everyone. Apparently she especially isn’t for the girl who stood in front of me in line for grilled cheese late in the day on Sunday, who was complaining to her friend about having to sit through Spektor.

“She was such a fucking joke,” she lamented loudly enough for myself, and surely many other Spektor fans in line, to hear. She went on to complain so emphatically, and so mean-spiritedly, that you’d have thought Nickelback had taken the stage for a surprise duet with Carly Rae Jepsen.

It doesn’t take a music historian to tell you that summer music festivals ain’t what they used to be. Woodstock, the original gold standard of 1969, lived up to its tagline “Three Days of Peace and Music.” Woodstock 99, held 30 years later in upstate New York and broadcast on MTV, is remembered more for its hugely problematic violence and abrupt ending rather than for any musical acts.

Woodstock 99 was doomed to not repeat history. And considering that festivals today are often known more for holograms, hangovers and haughtiness than for their music, one could argue that in this respect, millennials are still partying like it’s 1999.

But I tend to err on the side of the girl with a flower in her hair. When someone or something attempts to ruin an experience, you don’t succumb. You push back. It was fucking San Francisco, it was fucking Outside Lands, and despite a few assholes, I had a great fucking time.