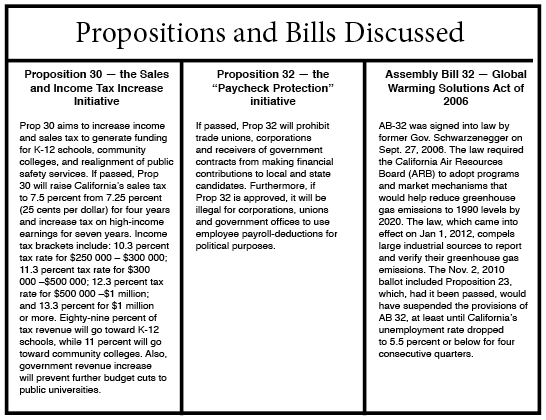 Various political pundits expressed divergent opinions on the future of California, and shared their hopes for election day during a public forum hosted by the Division of Social Sciences, Colleges Nine and Ten, the Latin American and Latino Studies Department, the Office of Government Relations and the Politics Department.

The forum, called “Elections 2012: What’s at Stake for California?” was held on Oct. 22 in conjunction with a live screening of the third and final presidential debate. The event’s venue, the College Nine and Ten Multipurpose Room was bedecked with huge placards stating arguments for and against each of the 11 ballot propositions. After watching the national debate, students, faculty and other Santa Cruz residents listened to panelists as they argued the key issues at stake for California in this year’s elections.

“We wanted to have various perspectives represented, and be as balanced as we could,” said Sheldon Kamieniecki, dean of social sciences at UC Santa Cruz.

The debate got heated as panelists expressed opposing viewpoints, particularly on Proposition 30, which, if passed, would raise income and sales taxes in California in order to fund K-12 and community colleges and thus prevent further cuts in UC budgets.

Laird urged the audience to vote in favor of Prop 30, and said it was an “investment in the future”. He said the increase in income tax, which would apply only to constituents with annual earnings of $250,000 or more, was a reasonable measure and a necessary step to help stabilize the state budget.

Amajoyi also argued in support of Prop 30, and said funding for education should be a priority in every state. She said she was dismayed to learn that student loan debt had recently surpassed credit card debt.

“[Students] are not asking for a handout, we just want a chance to survive … a chance to graduate and start a life without being tied down by chains of debt,” Amajoyi said.

Freedman, however, told the audience that Prop 30 and its proposed tax increases were “one more step down the wrong road.” He said the government should instead focus on creating jobs, which would generate more income tax and thereby help balance the budget.

A student from the audience said some students could only afford tuition by taking out loans and working several jobs. She asked Freedman how he would convince such a student to vote against a proposition that could potentially bring about a decrease in education fees.

Freedman said students should put pressure on the university to consider serious reforms before it is granted any additional funding.

“The UC system has more administrators than professors … they make more money than the governor,” Freedman said. “You have every right to shake your fists at them and say, ‘What the hell are you doing to me.’”

In recent weeks, SUA has worked to inform students about Prop 30. SUA members attended the forum as part of their voter registration drive to register students before the midnight deadline.

Third-year politics major Cassidy Kakin said he was concerned with the political apathy among his peers, who decided not to attend the forum because “they just don’t care.” He asked the panel how he could encourage his friends to engage with Prop 30 and the elections in general.

Krosnick responded that researchers who study the psychology behind politics had found that people are more likely to become involved in an election if they see the polls.

“If someone sees how close the race is between candidates they might realize that their vote can in fact make a difference,” Krosnick said.

Amajoyi said students’ lack of participation was not necessarily due to their indifference to politics, but rather a result of them being “bombarded” by school work, family matters and other personal issues. She argued that a change in rhetoric would get students more interested in political affairs.

“You can engage students by making [the elections] personal,” Amajoyi said. “Explain to your friends on a personal level how the ballot propositions will affect them.”