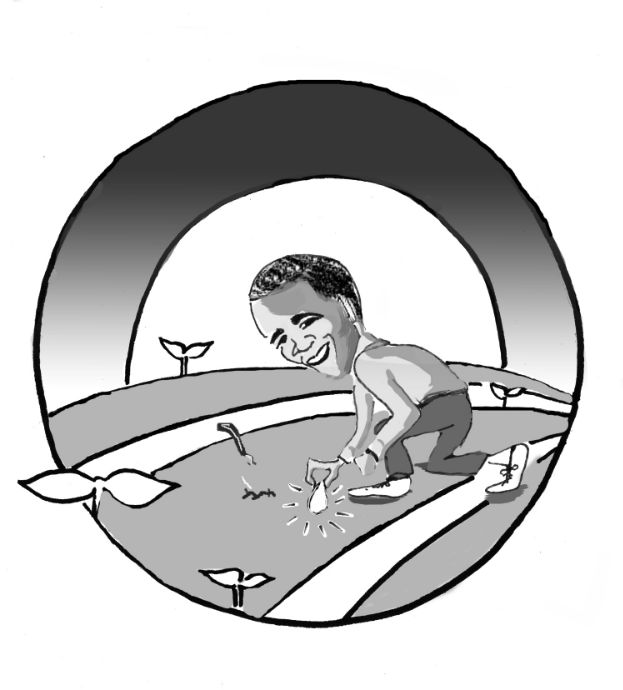 You’ve probably heard about the Keystone XL pipeline by now, but you might be a little bit fuzzy on the details.

Maybe you’ve heard that environmentalists have repeatedly called on Pres. Obama to can the 1,700 mile-long pipeline, which would pump roughly 510,000 barrels of oil a day from the tar-sand oil fields in northwestern Canada to refineries in the Gulf of Mexico, due to concerns over oil leaks and the fact that the tar-sands are one of the dirtiest sources of petroleum on the planet.

But maybe you haven’t heard that the only reason Obama even has a say in the matter is because the project would cross the U.S./Canada border, or that the XL’s sister pipeline, which is even longer and runs from Alberta to Illinois, already exists and has had oil flowing through it for three years.

There are plenty of other details I could bore you with, but here’s the thing: the details don’t matter.

What does matter is what the pipeline — and Obama’s decision to either approve or deny it — represents.

Which brings me to another thing you may not have heard about. On Feb. 18, protests were held around the nation denouncing the Keystone XL, in cities from Chicago to San Francisco. Although it didn’t receive much in the way of national media attention, the main event was in Washington D.C., where 40,000 protesters rallied at what’s now being called the “largest ever climate protest in U.S. history.”

The way this protest was covered by conservative media outlets helps to highlight just why the decision over the pipeline is so important. With headlines like “Idiots Converge on Freezing D.C. to Protest Global Warming” and “Bitter Cold Greets Global Warming Protesters,” most of these articles played up the supposed irony inherent in protesting global warming during cold weather.

And they’re far from the only ones using day-to-day weather patterns as the basis of their belief, or lack thereof, in global warming.

A study released earlier this month found American’s attitudes towards global warming change with the weather — with more people identifying as believers and more media outlets publishing stories on global warming in months with very hot or cold weather, and less in gentler months.

But this just helps to illustrate a key fact about climate change and one major reason why it’s so hard to make believers out of skeptics: “Climate change is not a breaking story,” said Simon Donner, a climate scientist and the study’s author.

In fact, global temperatures haven’t increased at all in the last 10 years, a fact that has led many skeptics of global warming to claim that there’s nothing to worry about.

But in doing so they completely miss the point: Climate change and global warming are only understandable in the context of the long term.

They take place over decades and their effects are an intricate and interlocking series of events that at times can seem outright contradictory — like the Midwest experiencing one of the most severe droughts on record followed immediately by one of the most extreme snowstorms on record, as is happening right now.

Plus, if you go back a hundred years there has in fact been a clear and relatively steady rise in global temperature. It’s only when you zoom in and look at it in terms of days, months or handfuls of years that the picture seems haphazard or open to interpretation.

And this is exactly why Obama’s decision on the Keystone XL is so important. If he denies the pipeline it will send the most tangible and unequivocal message to date that the United States is taking climate change seriously and not changing its mind on a day-to-day basis.

It will send the message that, in the long-term, even projects as large and expensive as this one are not worth sacrificing the well-being of our planet.

Obama has been talking a lot about climate change in the last few months. By moving from rhetoric to action he’ll be demonstrating to Americans and to the rest of the world that the thousands upon thousands of reports and statistics released thus far on global warming demand solutions as well as our undivided attention — both now and in the future.

And before I go any further, a quick word about some of those statistics.

While it’s true that global temperatures haven’t increased since 2000, it’s also true that last May marked “the 327th consecutive month in which the temperature of the entire globe exceeded the 20th-century average, the odds of which occurring by simple chance were 3.7 x 10^99, a number considerably larger than the number of stars in the universe,” said Bill McKibben, a prominent climate change spokesman, journalist and environmentalist, in a Rolling Stone article.

Which is why it’s besides the point that it still got cold this winter, or that global temperatures haven’t risen in 10 years, or that we’ll most likely have some pretty mild months in between the extreme ones.

The point is climate change is happening, humans are causing it and unless we can learn to engage with it on a long-term basis and factor it into our short-term decisions, by the time we’re ready to act it will be too late.

The specifics of the Keystone XL Pipeline don’t matter much in the grand scheme of things, but the message Obama’s decision will send absolutely does.

By saying no, Obama will be taking the all-important first step towards putting the big picture into perspective and finally acknowledging that climate change trumps any narrow, short-term understanding of what’s best for ourselves, our nation and our planet.