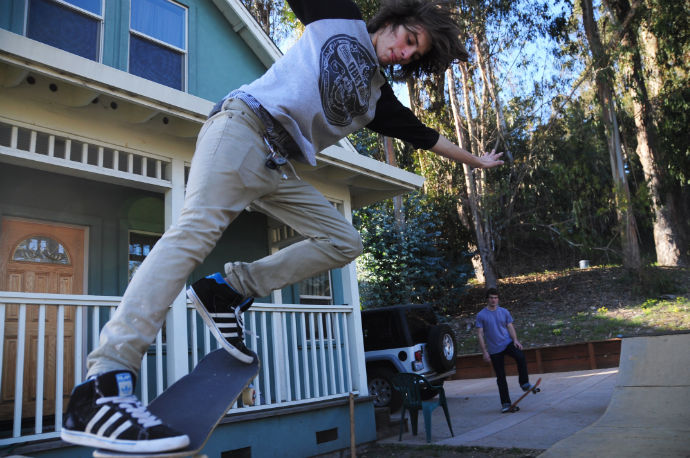 UC Santa Cruz Students Nick Chase (left) and Steven Esser built a half pipe in their front yard, giving themselves an off-campus place to skate. Photo by Sal Ingram.

UCSC skateboarders mostly say dangers are inherent in skateboarding UCSC’s campus because of its hazardous traffic and steep hills. Some however ignore that danger, despite a campus wide ban, while others seek different outlets in Santa Cruz for their sport.

Skateboarding UCSC students often ride longboards on campus — skateboards meant to ride hills and paths, not half-pipes. These boards are often used for transportation between classes.

“UCSC is a dangerous campus to skate on for sure, especially for new skaters, who are easy to spot and whom I see everywhere, but I think skating is such a convenient mode of transportation it shouldn’t be discouraged or prohibited,” said first-year Ph.D candidate Dave Fryxell.

UCSC Chief of Police Nader Oweis said skateboarding was banned on campus because of its potential for harm.

However, Oweis said he is open to discussing changes to the skateboard ban to ensure safety for UCSC’s skaters.

Oweis said the police department of UC Davis, which Mr. Oweis once worked for, has opened a conversation about making skating legal in certain areas on Davis’ campus. Oweis noted that geographical differences between the two campuses made Davis—a flatter campus—safer for skating.

Oweis also said several incidents of students injuring themselves skateboarding at UCSC have occurred since his 2011 hiring.

One student, who wished to remain anonymous because of the campus ban, said they had multiple run-ins with the police, the first of which resulted in a citation and fine which later was reduced to community service hours. Since then that student has taken precautions to avoid citations, including skateboarding at night with a group of fellow riders.

“Its harder for them to give everyone tickets if we travel in a group,” the student said.

Sometimes that student said their skateboarding group of friends may scatter into the forest at night to make a quick getaway from UCSC police. Other students have reported suffering injuries when making this type of escape from the police.

Second-year Nick Chase  is a skater who supports prohibiting skateboarding on UCSC campus, citing the reckless nature of inexperienced skaters.

“Some people just buy a longboard and [they think] ‘look there’s a hill’ and they don’t even learn how to skateboard and go down these hills at 30 miles an hour,” he said. Chase said he witnessed a skateboarding student accidentally collide with the back of a bus as it drove downhill from College Eight.

Skateboarders do not lack for options, should they choose to not skate on campus. Mike Fox Park, located on San Lorenzo Boulevard, has been a magnate for shortboard toting skateboarders since its 2007 opening.

Third-year skateboarder Christina “T” Miller said she was in favor of the type of skateboarding that occurs in places like Mike Fox Park.

“I definitely think that skateboard culture is really cool,” Miller said. “Like you can see someone working on a trick for a really long time and then finally when they get it down, everyone in the skatepark will see it and we all smack our boards down. But I think that not being allowed to skateboard on campus is a good idea because there’s too much traffic and too many pedestrians and the campus is too hilly.”

Miller said UCSC should embrace its skateboarding community by providing them a safe place to skate on campus so they don’t have to travel to far away parks or use the busy and dangerous UCSC surface streets.

“I do think that it’s not fair that we have a lot of facilities on campus for other sports and not skateboarding,” Miller said. “If they’re going to make skateboarding illegal on campus, they should at least put a really small skatepark somewhere.”