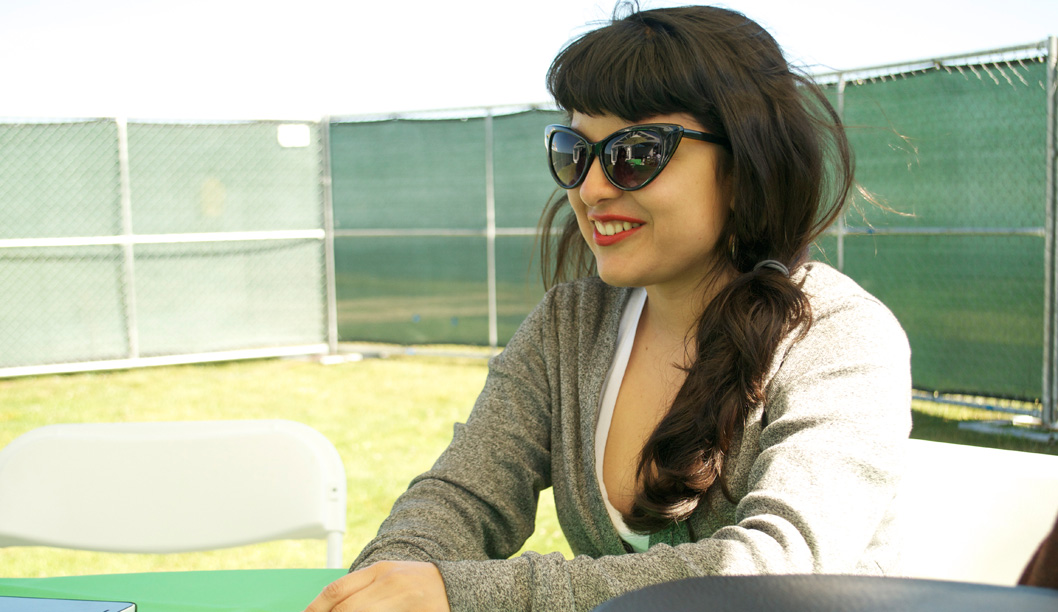 City on a Hill Press: You’re from LA, right? Can you tell me a bit about the scene down there and how you got started in music?

Irene Diaz: The scene is interesting. When I started playing, I started playing out a lot. In 2011 I started branching out. I live in the Highland Park area and the scene is interesting — you have Hollywood, you have the East side which is like Boyle Heights area. I think a big chunk of what has helped me is meeting a lot of Latin artists — meeting Las Cafeteras and meeting promoters like Mucho Music. They kind of bumped me up a bit because I opened for Las Cafeteras for one of the Mucho Wednesdays events. Ricky, who was the promoter, really liked my music and he had me on some interview and somehow Jasmine Garsd from NPR Alternative Latino heard my music. He sent out an email with my video on it and somehow she opened it, and that kind of branched off into different things.

CHP: Is that how you got to attend NPR’s Latin Alternative Music Conference?

Diaz: Well we went to the Latin Alternative Music Conference because we saw that Las Cafeteras went so we thought, “Oh, that might be cool to go to.” We didn’t go the same year they went, we went the next year.

We weren’t on the schedule for anything but we were hosted by AfroTaino productions and they took real good care of us. They got us into the press room and we weren’t even supposed to be there. So we got in and we did little interviews here and there, but then there was this one interview … because she brought her ukelele and one of the interviewers was like “Oh can you play a song?” and we agreed. So we played and all of a sudden we get pulled to another room which is not the press room, but a room where they had a sound set-up.

So they had me perform there and it just … it kind of blew up after that because Felix Contreras from NPR Alternative Latino had my picture on the front cover of their “Who Rocked, Who Shocked, Who Killed.” I didn’t even know I was going to be there, he just asked me for a picture. So he put me right up front and that was like ‘woah.’ Kind of shows how supportive people have been organically. Not having to have any publicist or somebody pushing your stuff. It’s nice to start off organic.

Diaz: I think one of the most valuable things as an independent artist is to have a team. You can’t do it by yourself. I have Carolyn, she helps me out with a lot of things. You need a team helping you with online stuff, get organized, you have to get a website going. Obviously you want to be the one that’s posting things on your sites, you don’t want to be fake.

CHP: But it’s still a lot of work.

Diaz: Yeah, it is but somehow you do it. You have to balance things out. What was the other one?

CHP:  What’s the most difficult thing?

Diaz: Balancing [laughs]. Balancing all of that out because I’m still a working musician. I have a day job.

CHP: Where do you work?

Diaz: Yeah, it’s really cool and luckily they give me time off to do these things. They’re really supportive of me so it’s nice.

CHP: How did you first get into music?

Diaz: I’ve been playing piano since I was a kid. I really took to the piano. I used to practice and make up my own little melodies on the piano and it just felt really good to compose. I stopped taking piano lessons when I was fifteen. My dad plays guitar, so I kind of picked up the guitar … I started writing urgently on the guitar and then the piano came later, like singing and writing. But I’ve been writing since I was a teenager. The music is something that I think is in me.

CHP: Can you tell me about how you funded your EP (I Love You Madly) on Kickstarter?

CHP: That’s awesome. It seems like it came together really quickly too. So you’re on a Bay Area tour right now, how’s that been going along?

Diaz: It’s been great! I’ve had my first sold out shows. One at Red Poppy Art House then one in Oakland last night. it’s been really good. I mean it’s not a huge tour, I just say tour because it’s consecutive shows.

CHP: How many shows are you doing?

Diaz: We did two shows on Thursday, one yesterday and then today. So it’s like a mini-tour.

Diaz: Amazing! The audience response … I don’t want to say that … I mean LA is great. I think every city accepts music in different ways and the places I was at were the ideal spaces for my music. They were small venues, just listening spaces. Just pure listening, it’s not a bar. It was really sweet and the audience was amazing.

CHP: So the big theme in your music is love. What have you learned about love through writing music?

Diaz: Ooh. That there is a lot to it [chuckles].

CHP: I guess if anything. For a lot of people, you know, the songwriting process is a process of self discovery because you’re working through a lot of personal stuff.

Diaz: I think that love is … I don’t know. I kind of think, you know, there are different sides to love. There’s the romantic, there’s the love you have for your friends. But it’s the driving force behind everything. It should be. Even, think about this Edge of Eden event. Somebody wanted to do this. They had love in them to actually get this organized and set up. The same with my music, if there is no love or passion there, it’s going to be empty. So with everything that’s in the world that happens, it all has to come from a place that is love. It sounds cheesy but I think it’s true. I really believe that.