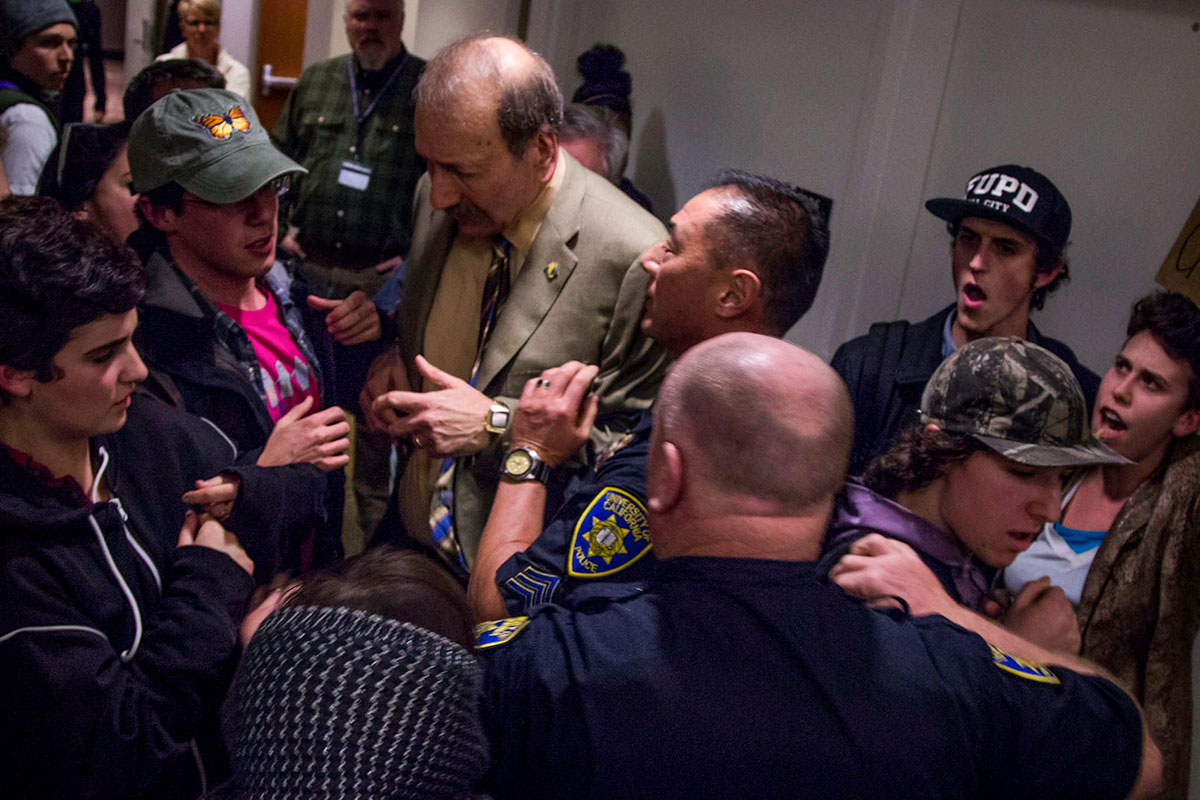 University police officers were called by a staff member to escort Blumenthal past the demonstration. Photos by Jasper Lyons.
Campus 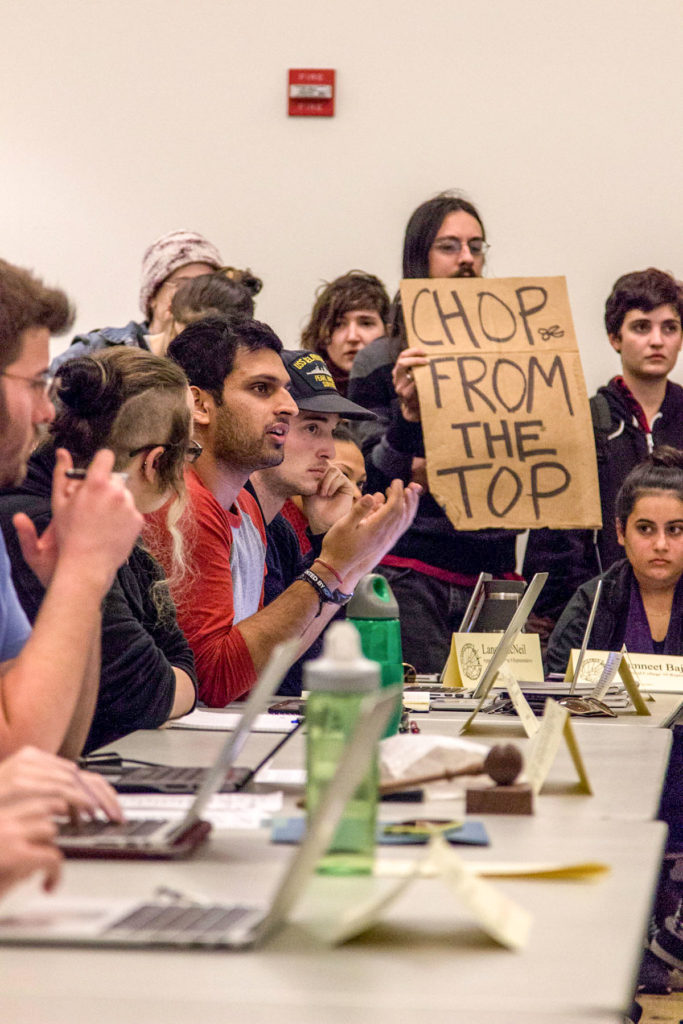 Protesters stood in the background during the Q&A session and proceeded to block the exit upon the announcement that the chancellor had another meeting to attend and had to leave. Photos by Jasper Lyons. 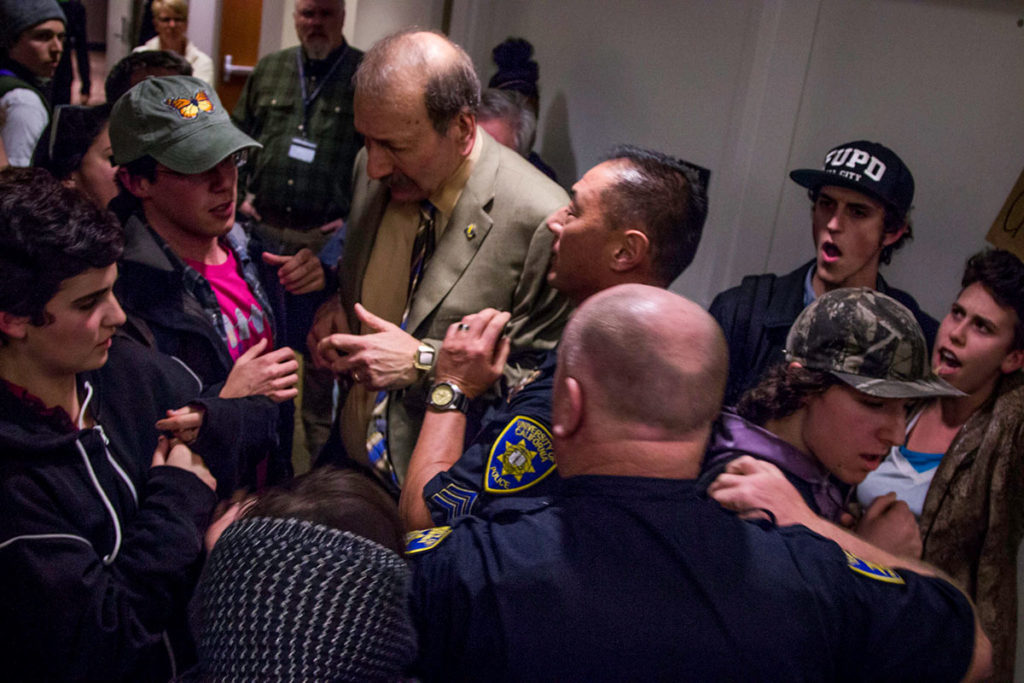 University police officers were called by a staff member to escort Blumenthal past the demonstration. Photos by Jasper Lyons. 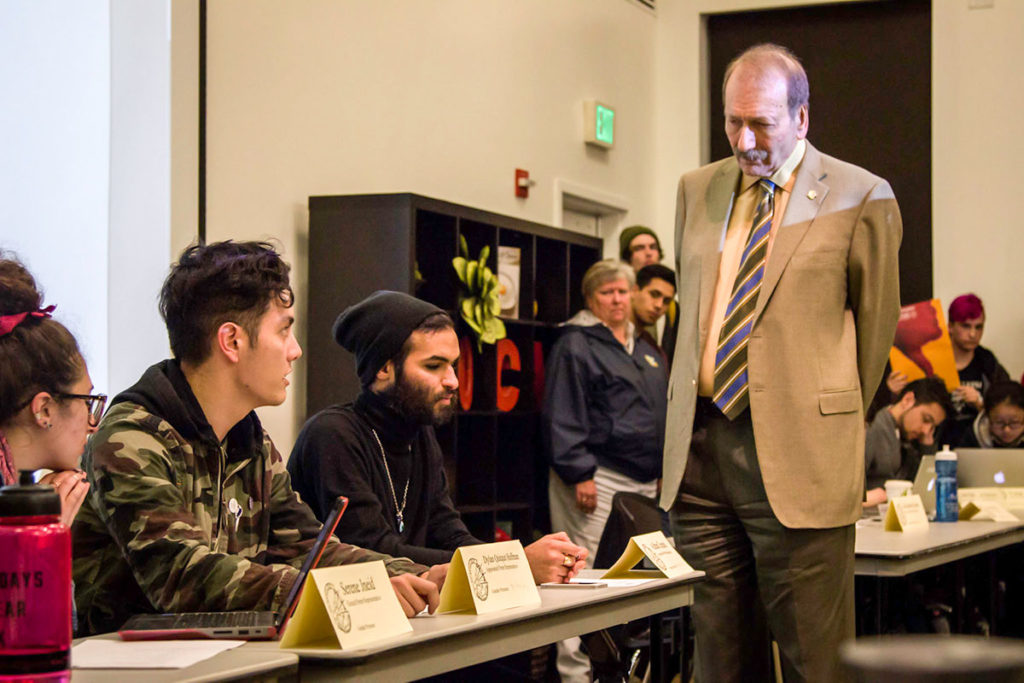 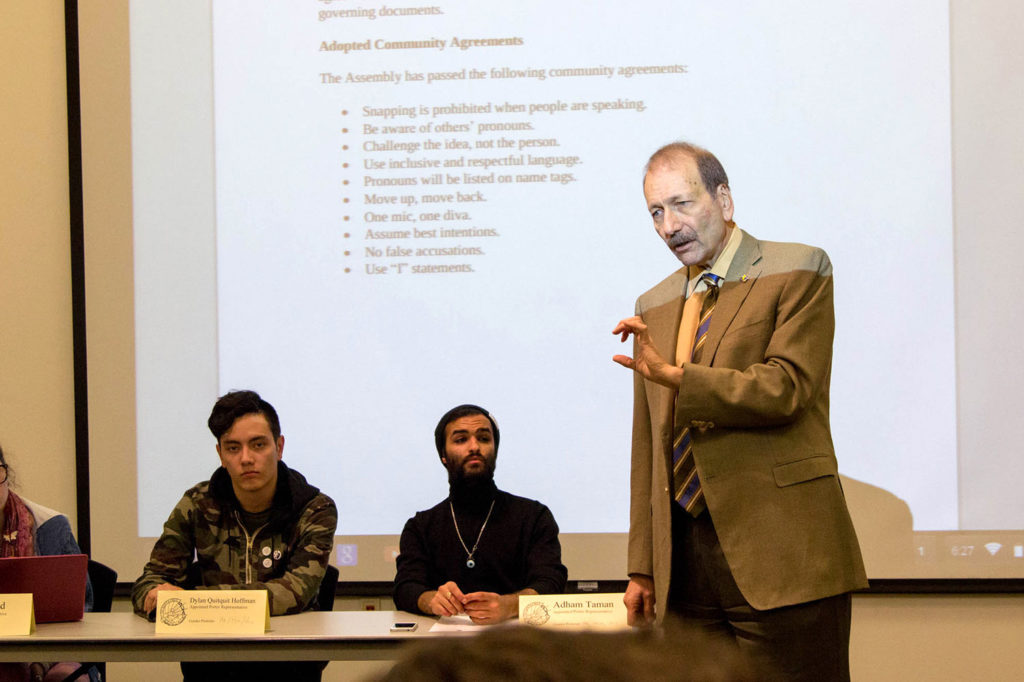 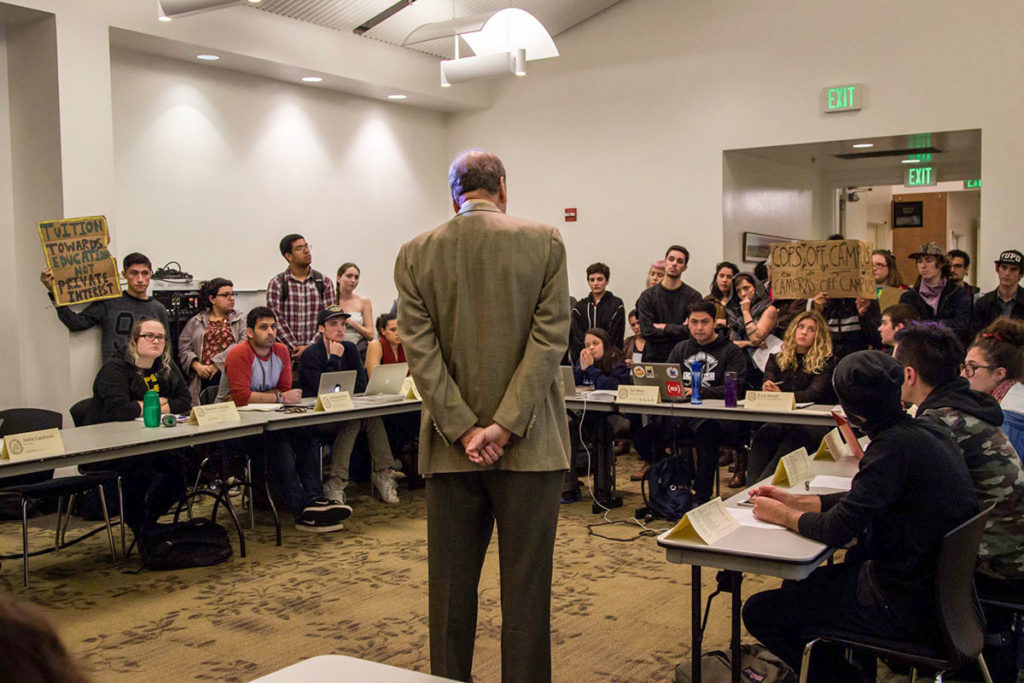 By Diana Dolloff and Montse Reyes

In anticipation of Blumenthal’s expected discussion with SUA members, about 30 student demonstrators vocalized their discontent with his and the UC regents’ actions, namely the tuition hike and the increased privatization of the UC.

“We were just trying to keep him in there for five more minutes,” said a second-year student who was allegedly thrown out of the way by a police officer. “The cops came in. The cops told people to let Chancellor Blumenthal out. I was standing there in front and one of the cops picked me up and actually threw me.”

When SUA Chair Justin Lardinois announced that Blumenthal would soon leave to attend another meeting, students delivered a prepared statement via “human microphone” — when a group of people repeat what a single speaker says as a means of communicating without amplification equipment.

“We are not here with the expectation to convince you of the irrationality of your program of privatization. You know very well what the hikes mean,” students recited in unison. They denounced the tuition increase, asserting it would make education inaccessible to working class students and students of color.

“He’s mostly hired to be a spokesperson who is able to answer only the right questions and otherwise skirt around the rest,” Hoffman said.

“He makes almost $400,000 and for him to not even stay here and answer our questions is disrespectful,” the anonymous student said. “Honestly, even if he hadn’t left, I don’t think he would have answered our questions truthfully.”

UC Santa Cruz police Chief Nader Oweis said the university police were called by a staff member to escort Blumenthal out of the room when students refused to let him exit. Oweis said this was the first instance when police involvement at an SUA meeting was necessary.

Because Oweis was not at the meeting, he could not comment on the alleged throwing of a student demonstrator, but did comment on the blockade of the exits.

“This really did cross the line,” Oweis said, “[Demonstrators’] actions — infringing upon his rights as an individual to freely move and his liberty to move, which are constitutionally protected — crossed the line.”

Porter College representative Dylan Hoffman disagreed, stating, “I personally think [the blockade] was an extremely justified action and I think if the administration, the regents and the democrats don’t change their position they can definitely expect that sort of militancy and that’s a good thing.”

When Blumenthal left the room, a short recess was taken. Shortly after, SUA unanimously approved a no confidence resolution — sponsored by Hoffman and Adham Taman, another Porter College representative. A no confidence vote, also passed by UC Berkeley, UCLA, UC Davis, UC Irvine and UC Riverside, signifies that the student government has no faith in UC President Janet Napolitano and the UC Board of Regents’ ability to do their job.

“It is a very strong symbolic statement,” said SUA Chair Justin Lardinois. “It’s very powerful for us to have this symbolic resolution that says, ‘We don’t think this tuition increase is in the best interests of the student body, and that the president of the University of California and the regents are not working for students and keeping their best interests in mind.’”

In drafting the resolution, which was presented to the SUA during the last week of fall quarter, Hoffman and Taman aimed to take a symbolic stance against the UC regents and stand in solidarity with other UCs.

“Hopefully it will be a domino effect to show that all student governments in the UCs are opposed to the disgusting acts of the regents,” Taman said.