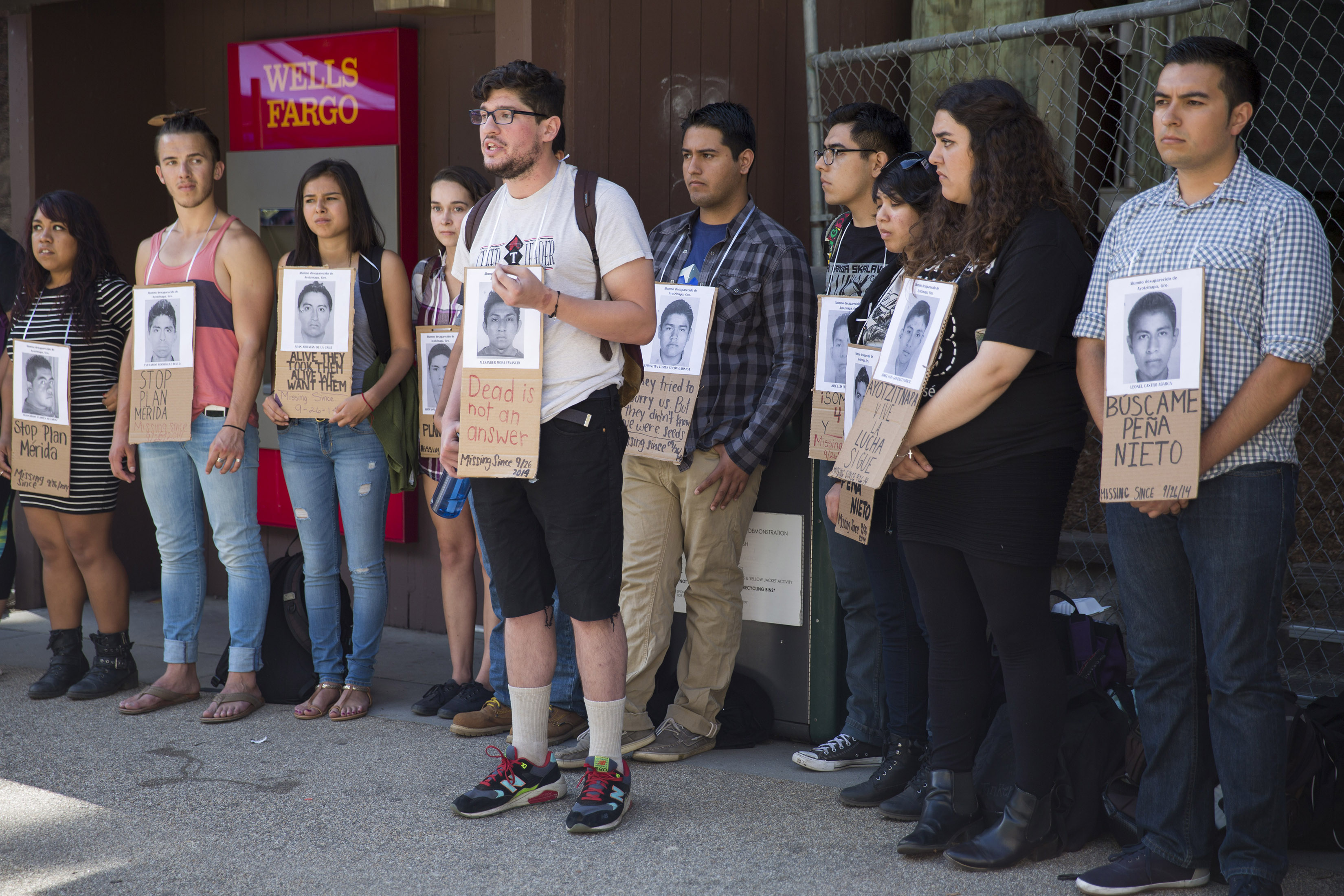 A group of about 20 students gathered in the Quarry Plaza last Friday to stand in solidarity with the 43 Mexican students who went missing a year ago when traveling back to Ayotzinapa. UCSC students wore and laid out pictures of the Mexican students while announcing their names and banding together to show their commitment to keep fighting. Photo by Casey Amaral.
Campus

Diana Gonzalez held up the handmade cardboard sign she was wearing around her neck — a photo of Jorge Álvarez Nava, with the words “Alumno desaparcido de Ayotzinapa, Gro.,” Ayotzinapa student disappeared. Under the photo in Sharpie, she had written “Alive they took them, alive we want them. Missing since 9/26/14.”

The members of UC Santa Cruz’s chapter of California Students for Ayotzinapa all wore similar signs with photos and names of the 43 students who were kidnapped while traveling back to Ayotzinapa from Iguala. They traveled to Iguala to get busses to attend a commemoration of the 1968 massacre of Tlatelolco in Mexico City.

The state released their findings, but the truth of what happened — and where the victims are — remains contested and unconfirmed.

Each sign honored one student who went missing one year ago on Sept. 26, the day after their demonstration. In the busy Quarry Plaza on Friday afternoon, the collective stood in a line with “Ayotzinapa” spelled out on the ground in front of them. The demonstration began with a chant about how the fight for the 43 students continues, before fifth-year Álvaro Mendizábal read off each student’s name, followed by “Ausente” — missing — and “one year, zero answers.”

Often students who don’t identify as Mexican struggle to see the connection between themselves and the Mexican government, Gonzalez said. She referenced the Mérida Initiative as one primary example of how all students’ tax money is implicit in violence and crime in Mexico. The initiative is intended to fund equipment and programs to combat drug traffic and protect human rights, and since 2008 the U.S. spent $2.5 billion through the plan to the Mexican government.

It is blamed for further complicating Mexico’s drug traffic security, and covering up tragedies like disappearances and kidnappings to continue the partnership. Since 15 percent of the aid is conditional on upholding human rights in Mexico, there’s incentive for the Mexican government to diminish the appearance of crime, and the U.S. government to overlook alleged injustices.

“What’s really happening is those weapons are ending up in the hands of people who don’t use them correctly and use them to abuse human rights,” Gonzalez said. “Your tax money is funding this, so you can make petitions, sign letters and that’s going to help — anything to prevent this from happening again, because this is just 43 out of thousands and thousands of people who have been missing.”

“We don’t plan on letting it die like a lot of tragedies,” De León said. “A lot of it has to do with the parents of students and what they want. We are in complete support of that. We are supporting the actions that the parents are doing.”

Earlier in September, Mexico’s attorney general said the second Ayotzinapa student of the 43 who disappeared was identified through analysis of a bone fragment by forensic experts. It allegedly matched with Jhosivani Guerrero de la Cruz, though the validity of the claim is debated. The only other student to be identified was 19-year-old Alexander Mora Venancio last December.

The “official version” of the story was that former Iguala mayor Jose Luis Abarca ordered the attack, asking the municipal police to capture the students in collaboration with drug cartel Guerreros Unidos, who killed the students and incinerated the bodies.

However, a number of documents and video have since proven that version of what transpired the night of Sept. 26 is false. In actuality, the attack was orchestrated by state and federal forces who had previously been surveilling the students. The students, many of whom were young activists, were specifically targeted because the ideological structure of their university fostered political dissent.

In July, the National Human Rights Commission released a report outlining findings that the attorney general’s office had done an insufficient job compiling basic information about the students and investigating multiple suspects in the case. The report found that the government’s version of events on Sept. 26 was impossible. President Enrique Peña Nieto is scrutinized for his administration’s blind eye to extreme issues of human rights, and excessive blame on organized crime, or complete denial.

The UCSC students wore signs that said “Buscame Peña Nieto” — find me Peña Nieto — written under one of the missing student’s photo. Earlier this month Nieto met with parents of the missing students, who made eight demands to the president, one of which included resuming the investigation of new reports that found the government’s conclusion was unsupported by evidence. The document they presented maintained that the state “generate[d] a historic lie.”

The collective remains critical of the investigation, and aims to educate students about the corruption this year as new information and reports continue to attempt to garner a clearer sequence of events last September.

“It’s about us coming together in solidarity with the students who disappeared and also with their families,” said fourth-year and collective member Brigida Gabriel. “Students can relate to them, and we are trying to make change and a better place for ourselves and students.”

At the end of their demonstration, the Ayotzinapa collective members gathered in a circle, held hands and started clapping and cheering. “They tried to bury us but they didn’t know we were seeds,” they shouted into the crowd.