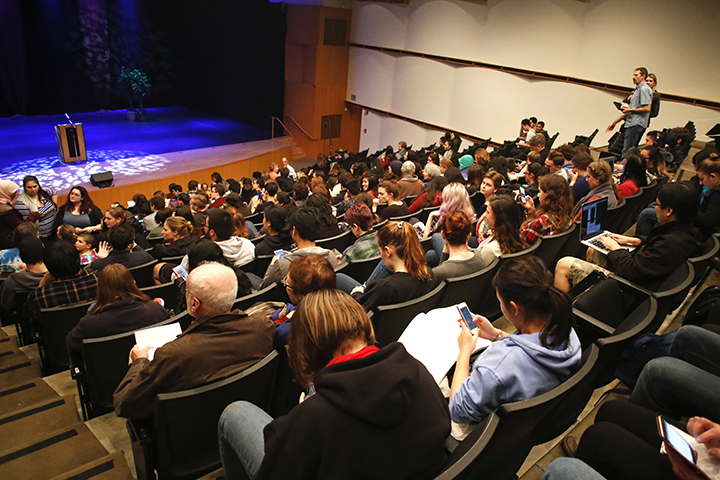 Success out of Suffering

“You don’t really know what you’re capable of doing until the chips are down and you have to act,” Dr. Hedwig “Hedy” Rose said softly but with poise and assuredness. She paused, and the room of onlookers could have heard a pin drop.

Rose stood before a packed audience of nearly 400 UC Santa Cruz students, faculty and community members last Thursday to talk about her experience in hiding during the Nazi occupation of the Netherlands during World War II. As she began her speech, the crowd members were in awe of how deeply her words would impact their own lives.

Her talk, “My Childhood in Hiding: Amsterdam, 1942-1945,” was organized by Cowell Provost Faye Crosby and sponsored by several colleges and programs, including the Center for Jewish Studies. Nathaniel Deutsch, the center’s director, said Rose’s appearance widely benefited the student body.

“[The Holocaust] was an incredibly catastrophic event for Jews and more generally for humanity,” Deutsch said. “To have a witness and to have a survivor who was there for an event of this magnitude is an incredible opportunity. You’re able to hear firsthand her stance on how the events occurred.”

Deutsch, who invited Rose to speak to his class in 2013, recounted how impactful her story is and how important it is that she’s sharing it.

“She has an incredible presence, a real gravitas,” he said about Rose — and the talk made that abundantly clear. He asked that students take the time to hear the voices of history while they still have the chance. “It’s a precious opportunity that’s rarer and rarer these days.”

Rose started her narrative by describing small, sudden differences she noticed when her world began to change as a Jewish child in Amsterdam in 1942. She wasn’t allowed to go out often, yellow stars were sewn onto her clothes and her father began to be questioned by soldiers more and more frequently. She received hostility from her best childhood friend, who suddenly refused to acknowledge her with anything other than slurs.

“I didn’t really know what a Jew was, and I especially didn’t know what a dirty Jew was, but I certainly knew there was something that suddenly changed overnight,” she said.

When her father was arrested, six-year-old Rose had to leave everything she knew without warning. She spent the next four years hidden in a basement with her mother and sister. Starving, sick and in constant fear for her life, she was met with nothing but heartbreak. A few years after her stay in the basement began, her family received word that her father had been sent to a concentration camp — it was the last she ever heard from him.

Shortly after, Rose awoke again in the basement to discover her mother had died in her sleep the night before. It was up to her older sister, who had been completely denied her adolescence, to keep her safe.

After Amsterdam was liberated, Rose and her older sister were finally out of danger. They decided to go to America to begin a new life, where she would devote her efforts to education, ensuring that no child would be denied an outlet to learn. She earned a bachelor’s degree from Cornell University, a master’s degree from Smith College and a doctoral degree from the University of Massachusetts, and has been teaching ever since.

After seeing dismissals of the Holocaust and its destruction only 20 years after its occurrence, she said something had to change, or that the past would be repeated.

While Rose was in hiding, 110,000 Jews living in the Netherlands were murdered. That accounted to over 75 percent of the Jewish population — the highest of any western European country.

“Why do I put myself through the pain of remembering all that?” she asked herself, looking past the audience. “I realize that we should’ve learned something from [the Holocaust]. Why isn’t that happening?”

In the ‘60s, she resolved to help “give voice to the 6 million Jews” killed in the war who could no longer speak for themselves. She’s been devoting her life to speaking engagements like this one ever since.

As the program concluded, Rose was met with a thunderous applause. An audience that stayed frozen in silence had suddenly risen to its feet in an extended standing ovation. She humbly adjusted her scarf as she smiled in appreciation.

The reception following Rose’s speech was lively with discussion. According to the conversations, it seemed that the impact of her narrative was widespread.

“I learned a great deal from listening to her story,” said Karl Heintz, a UCSC student who attended the event. “Everything she had to endure, [I appreciated] her resilience.”

At a Q&A after the event, she spoke openly about current issues. She related the plight of those attempting escape from the Nazi regime of World War II to modern Syrian immigrants seeking safety from a war-torn country. Though she tries to be optimistic, she wonders how humanity has the ability to still be so unfeeling toward those in need.

Jonathan Partridge, a prospect research specialist at UCSC, was particularly affected by this connection. “It’s frightening to think that history can repeat itself and often does.”

This reflection is the exact reason Rose says she continues to speak, and why she knew that bringing her story back to UCSC was so important.