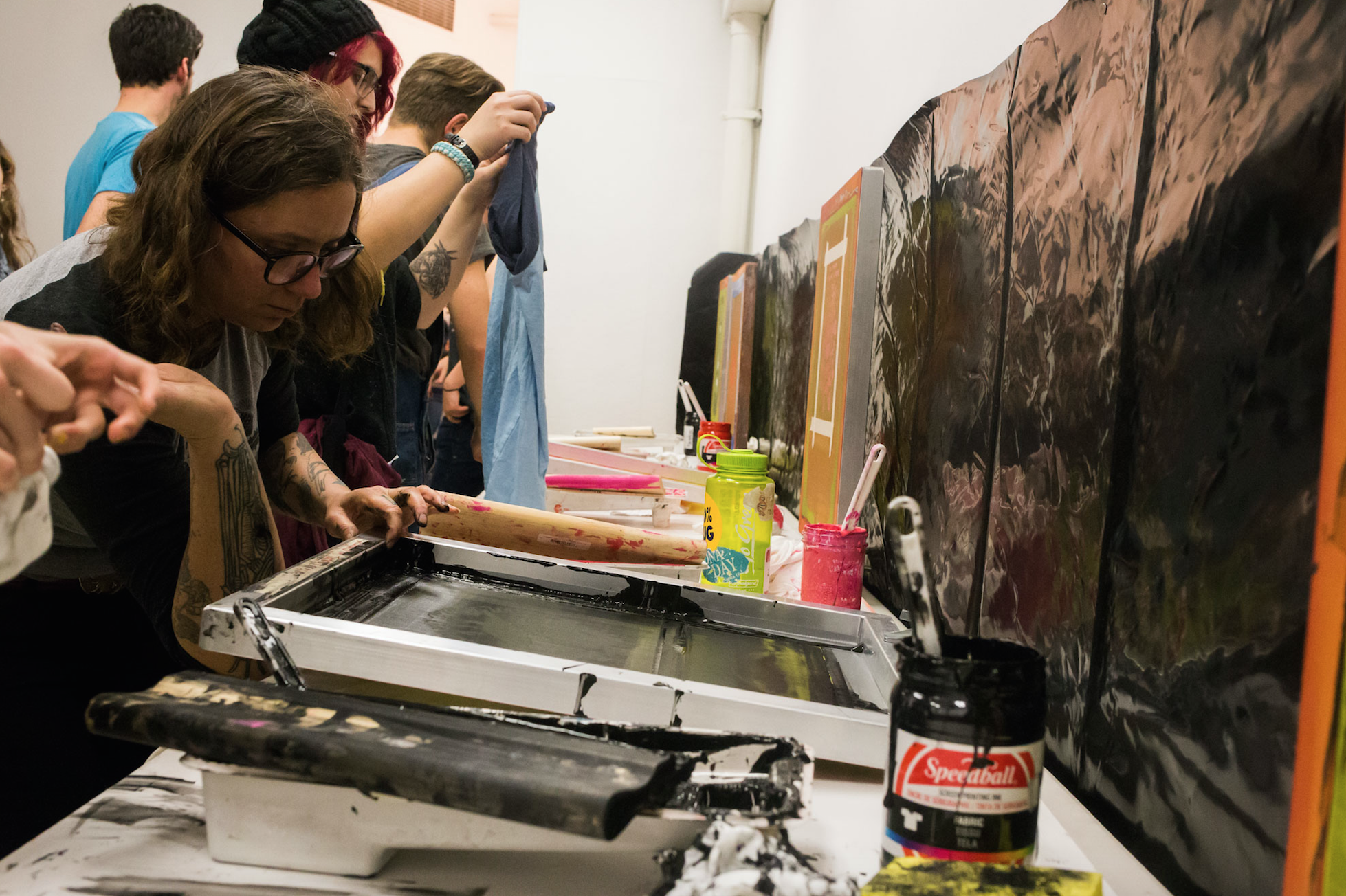 A banner reading “Imagination is power,” in bright yellow and red, shined through the clouds as it led hundreds of students through the UC Santa Cruz campus on Jan. 20.

“Art can convey a lot of things you can’t just say,” said attendee and second-year student Elena Stenger. “It’s hard to say something to every single person that you meet, but everyone can see what you are wearing, can see the poster you have, the artwork you have and interpret it in their own way.”

Sponsored by Porter and Kresge Colleges, the People’s Inauguration was a week-long event with daily art events featuring speech writing, silk screen T-shirt printing and banner and puppet making during the week leading up to President Donald Trump’s inauguration.

“[It’s] a series of dialogues and workshops that will clarify what experiences we have in common and then transform them into a message of hope for the future that we could share with other people,” said Porter College Provost Sean Keilen.

Organized by the General Strike Committee and combined with the People’s Inauguration, last Friday’s protest consisted of a campus walk-out, a rally at Quarry Plaza and a march to downtown Santa Cruz. Organizers arranged for speeches and art workshops to show resistance to hate and inequality. These workshops were open to anyone regardless of party affiliation.

“Art is an effective form of political activity because it brings into view the experiences that lie behind each person’s politics,” Keilen said. “Often those experiences are difficult to see and hear when political rhetoric is in play.”

The first two days of the People’s Inauguration focused on writing a speech for the beginning of the inauguration protest last Friday. Over 150 voices were compiled into a speech by a team of students and faculty. At the protest, the crowd circled together and each person read a line from the speech.

Parts of the speech represented steps for action. One statement read, “now is the time for communal discourse.” Others focused on the fears of students; “I worry about the normalization of racism and sexism.”

“It was really powerful to hear different voices say different things about what they believe in, and I feel like collectively we all individually feel those things,” said fourth-year student Karolina Wirga. “It was just really empowering to see everyone together, reading together, rather than having one person read the whole thing.”

The Wednesday workshop featured banner, mask and puppet making at the Sesnon Underground in Porter College.

Grant Wilson, a Santa Cruz resident and alumnus of UCSC, focused on creating an enormous puppet depicting a crow. He said the crow doesn’t symbolize one specific thing, it represents a nonhuman element which is usually forgotten in our human-centric society.

“Art can communicate nonverbally,” Wilson said. “Without it, a protest can seem more confrontational and not quite as engaging. Art is a transformative element that makes people wonder and question things.”

At the final workshop of the week, students silk-screened images and phrases like “wake up, refuse, resist” and “no walls, no borders, sin muros, sin fronteras” onto plain white T-shirts and flannels.

Porter College donated 150 shirts for the workshop, which were all gone within the first 30 minutes of the event beginning. Kyle McKinley and Laurie Palmer, both art department faculty members, helped students print their shirts.

“[Silk screen printing] is a lot of fun,” McKinley said. “It provides an opportunity for the kind of visual culture of representing one’s impulses.”

Erin Ray, a third-year transfer student, wore a “pussy grabs back” screen-printed shirt created by a fellow student at the general strike.

“The shirt is a way for me to protest while standing in solidarity with all the other people who feel like [Trump’s] presidency is violating their rights,” Ray said. “A lot of people may not be able to [physically protest] and creating art is a way that they can protest with us.”

Beyond silk screen shirts, the People’s Inauguration was a time of creativity and political discourse for UCSC students and faculty alike.