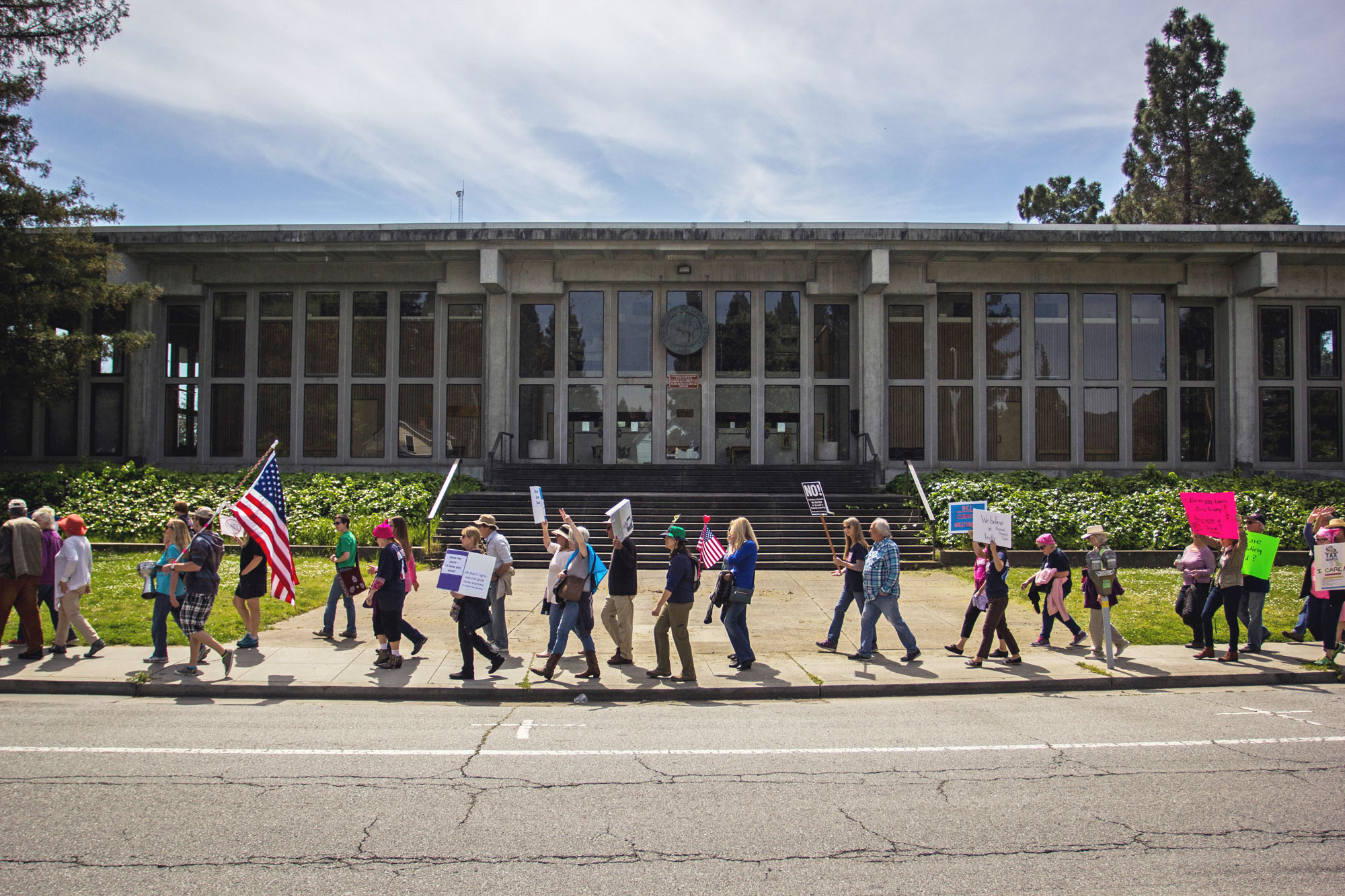 Demonstrators march down Water Street in front of the Santa Cruz County Government Center. Organizers requested that marchers remain on the sidewalk throughout the protest to ensure everyone’s safety. Meanwhile, passing cars and buses honked their horns in approval. Photo by Alonso Hernandez
News

No Representation Without Proving Taxation

The unbroken line of about 1,300 demonstrators in downtown Santa Cruz on April 15 spanned a quarter mile along Pacific Avenue, from Church Street to Cathcart Street.

Organized by Santa Cruz Indivisible — a group of local volunteers focused on fostering activism — the march was part of the nationwide Tax Day March. In honor of tax season, demonstrators from San Francisco to Washington D.C. pounded the pavement to demand the release of President Donald Trump’s tax returns. Trump is the first U.S. president since Gerald Ford, who came into office in 1974, to not release his tax returns to the public.

“He has to release his tax returns so we know what his conflicts of interest might be,” said demonstrator and Santa Cruz resident Ruth Smith. “He claims that nobody cares about his taxes […] we want people, we want him, to know that there are millions who care.”

The tax returns would clarify what holdings Trump has that may benefit from potential legislation, as well as whether or not Trump has financial ties to Russian oligarchs. Congressional Democrats have also pledged to oppose any of Trump’s efforts to rewrite the tax code until he makes his tax returns public. According to a poll by ABC News and the Washington Post, 74 percent of Americans want Trump to release his tax returns.

The demonstrators initially numbered only 200-300 when they first began to assemble at City Hall. Within an hour, the crowd’s numbers swelled to over 1,000.

“Tax returns aren’t exactly a sexy issue,” said Santa Cruz resident Eric Gross. “So I’m really impressed by how many people are making the connections and care enough to speak up about this issue.”

While the turnout was sizable, the vast majority of demonstrators were longtime Santa Cruz residents, some of whom lamented the lacking student presence.

“I encourage the young people to join us,” said a resident who prefers anonymity as a means to speak as a part of the collective instead of as an individual. “I’m not from [their] generation, so I don’t understand how you can be so constantly connected yet not go into action.”

Some marchers were moved to join the demonstration spontaneously as it passed by them, including local activist Curtis Reliford. Reliford is known for driving the “peace bus” during demonstrations in town.

“I was out there minding my own business, doing landscaping,” Reliford said, gesturing to his pitchfork with a makeshift sign jammed into it. “I saw these people out here protesting, it triggered what I experienced in Standing Rock […] We can’t be quiet no more. All we’ve got is our voices, prayer and hope that we can unite.”

The procession of demonstrators eventually rounded the corner of Ocean Street and Dakota Avenue, ending at San Lorenzo Park. Upon reaching their destination, the majority of marchers dispersed. However, Santa Cruz Indivisible held a relatively small forum discussing future action.

“Our motto is ‘respond, resist, restore,’” said Santa Cruz Indivisible co-founder Carson Kelly. “The goal here is to do what the founding fathers wanted us to do […] You get together and have reasonable, rational dialogue about what’s in the best interest for not just me and you, but for everybody.”

Santa Cruz Indivisible will be taking part in organizing the Santa Cruz chapter of the global March for Science on Earth Day, April 22.