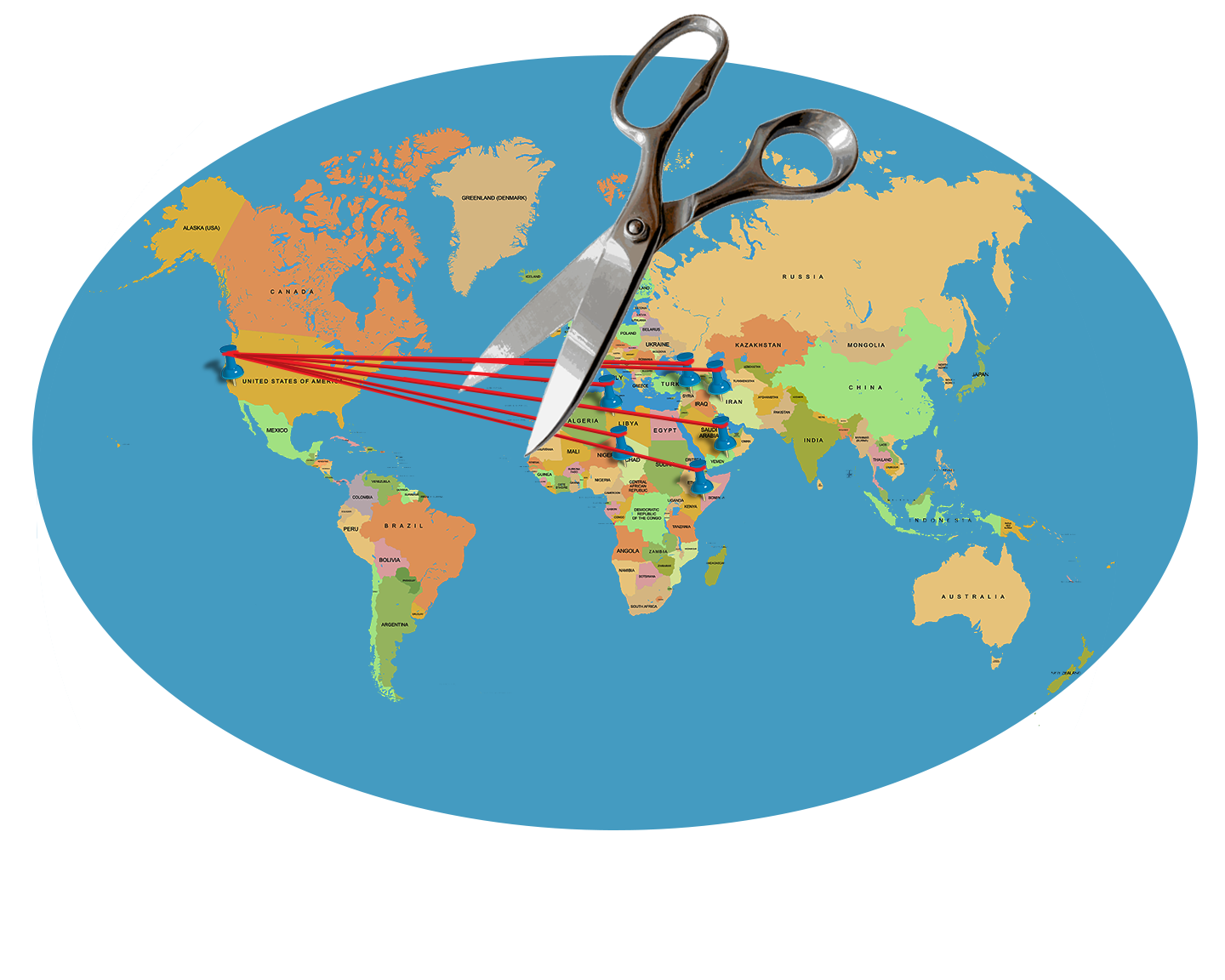 Ten months after President Donald Trump proposed the first Travel Ban, the contentious executive order continues to affect people across the world. Locally, UC Santa Cruz students are being divided from their families and left in uncertainty.

Neda Mansouri*, UC Santa Cruz second-year, was looking forward to reuniting with her extended family in March to celebrate Nowruz, the Iranian New Year. Abir Rashid’s grandparents canceled a trip to Pakistan to visit family in fear of not being able to return even though they had green cards.

Mansouri and Rashid are two of millions across the world affected by President Donald Trump’s Executive Order 13769, commonly known as the Muslim or Travel Ban.

The original Travel Ban was enforced from Jan. 27 to March 16, 2017, not allowing families like Mansouri’s time to plan visits for the Iranian New Year on March 21. The ban affected Mansouri and her family although she is not Muslim.

“In my family I’ve had a handful of relatives who have been trying to come into the U.S. [from Iran] to visit. Especially from my grandpa’s side of the family. […] Just for a visit too, it’s not even their intention to stay here,” Mansouri said.

Now, ten months later, the ban’s impact is still unfurling. At UCSC, the ban affects travel and residency for 25 international students, said Parinaz Zartoshty, director of International Student and Scholar Services. It also affects students who have ties in the banned countries, as well as graduate students and researchers who’ve been unable to re-enter the country.

Trump signed the original ban, titled Protecting the Nation from Foreign Terrorist Entry into the United States, into law just one week after his inauguration. This banned travel between the U.S. and Iraq, Iran, Libya, Somalia, Syria and Yemen.

After two revisions, the U.S. Supreme Court approved the current version of the ban on Dec. 4 but is waiting for lower court rulings in San Francisco and Virginia to make the ultimate decision of whether it is constitutional. This current ban bars travel between the U.S. and North Korea, Venezuela and six primarily Muslim countries: Chad, Iran, Libya, Somalia, Syria and Yemen.

Mansouri, whose father was forced to leave his home in Iran during the 1979 revolution, is now unable to visit her extended family.

The Evolution of the Ban

“I was planning on going to Iran and I don’t even know if I can,” Mansouri said. “The fact that there’s even doubt on whether or not I can go and see my family is terrifying. Why do you have to impede my liberty of going and seeing my family?”

The first ban took effect overnight on Jan. 27. Previously issued travel, business and student visas or refugee travel documents from the six countries suddenly became invalid. Affected travelers needed proof of a bonafide relationship with a U.S. citizen to enter the country, according to the order, excluding Syria which had a 120-day complete block of travel.

“There was a lot of fear when the first executive order was passed […],” said Abir Rashid, UCSC third-year and treasurer of the Muslim Student Association (MSA). “Even among people who aren’t from the seven banned countries. […] Even among U.S. citizens.”

While this original ban applied exclusively to countries with Muslim- majority populations, the most current version includes North Korea, Venezuela and Chad alongside the previous list that included Iran, Libya, Syria, Yemen and Somalia. The initial ban on Iraq was removed.

Travel restrictions vary from country to country, but in general citizens of the affected countries will be unable to emigrate to the U.S. permanently. Many will also be barred from working, studying or vacationing in the U.S.

Under the previous ban, individuals had to prove they had a valid relationship to the U.S. This relationship was restricted to specific family members or business or university ties. Business visas were given at the discretion of the federal government. Only U.S. Customs could determine what constituted a substantial connection in the U.S. for a traveler.

The U.S. will continue to deny visa requests for countries that do not qualify under the “bonafide relationship” categories. The U.S. Supreme Court did not rule the travel ban constitutional, but seven out of nine justices considered a temporary block on the executive order unnecessary. This is the first time justices have allowed any version of the ban to be fully enforced.

While the ban is titled “Protecting the Nation from Foreign Terrorist Entry into the United States,” none of the iterations of the ban include Saudi Arabia, Egypt or the United Arab Emirates, the three countries in which the leaders of the 9/11 attacks set up base in. Instead, the ban and its revisions block countries where millions are seeking refuge from war and violence.

While Islamophobia may not be new to the U.S., hate crimes against Muslim people rose 91 percent in the first half of 2017 as compared to the same period in 2016, according to a report by CAIR released in July.

At UCSC, the Office of Diversity, Equity, and Inclusion reported 151 reports of hate and bias incidents in the last academic year. The highest number of reports came in November 2016 and January and February 2017, correlating with the election, the inauguration and the first 30 days of the Trump administration.

“I’ve had a lot of threats because of some of the protests that I do on campus,” Neda Mansouri said. “I have received some negative threats from other people. That has gotten in the way of a lot of my studying.”

Though not Muslim, Mansouri finds that being Iranian on campus belittles her voice in the eyes of other students.

“Being an Iranian student on campus has had a lot of implications because it’s a lot more obvious that I’m not white,” Mansouri said. “[…] Whenever I do voice my opinion on any political issue, […] white people tend to try to suppress my voice because it’s just like ‘Oh, it’s just another person of color. They’re just angry again.’”

Though every Muslim practices their faith uniquely, UCSC has been slow to accommodate the needs of its Muslim students. It wasn’t until the MSA advocated for better access to halal foods, or food following Islamic dietary laws, did the campus provide halal options in the dining hall. The monthlong holiday of Ramadan also overlaps with final testing in spring and late night tests conflict with the time Muslim students would break their fast, said MSA Treasurer Abir Rashid.

“It’s definitely hard to practice your faith in an environment where people don’t live the same way as you. […] Ironically, the new [presidential] administration brought a lot of attention to the issues of being Muslim in the United States,” Rashid said. “As a [first-year], I felt very invisible. […] I didn’t feel like the faculty or staff or the campus in general was doing very much to accommodate for Muslims and make Muslim students feel included.”

Muslim students and students from the banned countries are dealing with being stigmatized because of their religion and race all across the country, said San Francisco CAIR director Zahra Billoo.

CAIR was founded in the mid-90s and works to provide civil liberties for Muslim communities in the U.S. Billoo was among thousands of protesters who flooded airports across the nation when the ban was enacted. The CAIR national office, along with many others, sued the White House over the ban and its revisions.

“I was concerned back in 2015 that this person may become president and attempt to fulfill his campaign promise,” Billoo said. “That concern soon shifted to indignation and a desire to take action. […] I am no less determined to fight him.”

Chloe Reynolds is co-editor in chief at City on a Hill Press and an award winning student journalist. Beginning her career as a campus reporter, she found a passion for reporting on issues affecting communities of color on campus and in Santa Cruz. She was then promoted to be the Arts & Culture editor, which she changed from the Arts & Entertainment desk in order to effectively report on the struggles and successes of people of color. In her storyfinding she challenges the culture of what is classically considered “newsworthy”, looking for stories that are underreported and undervalued. She enjoys learning, unlearning and keeping her coily hair adequately moisturized.