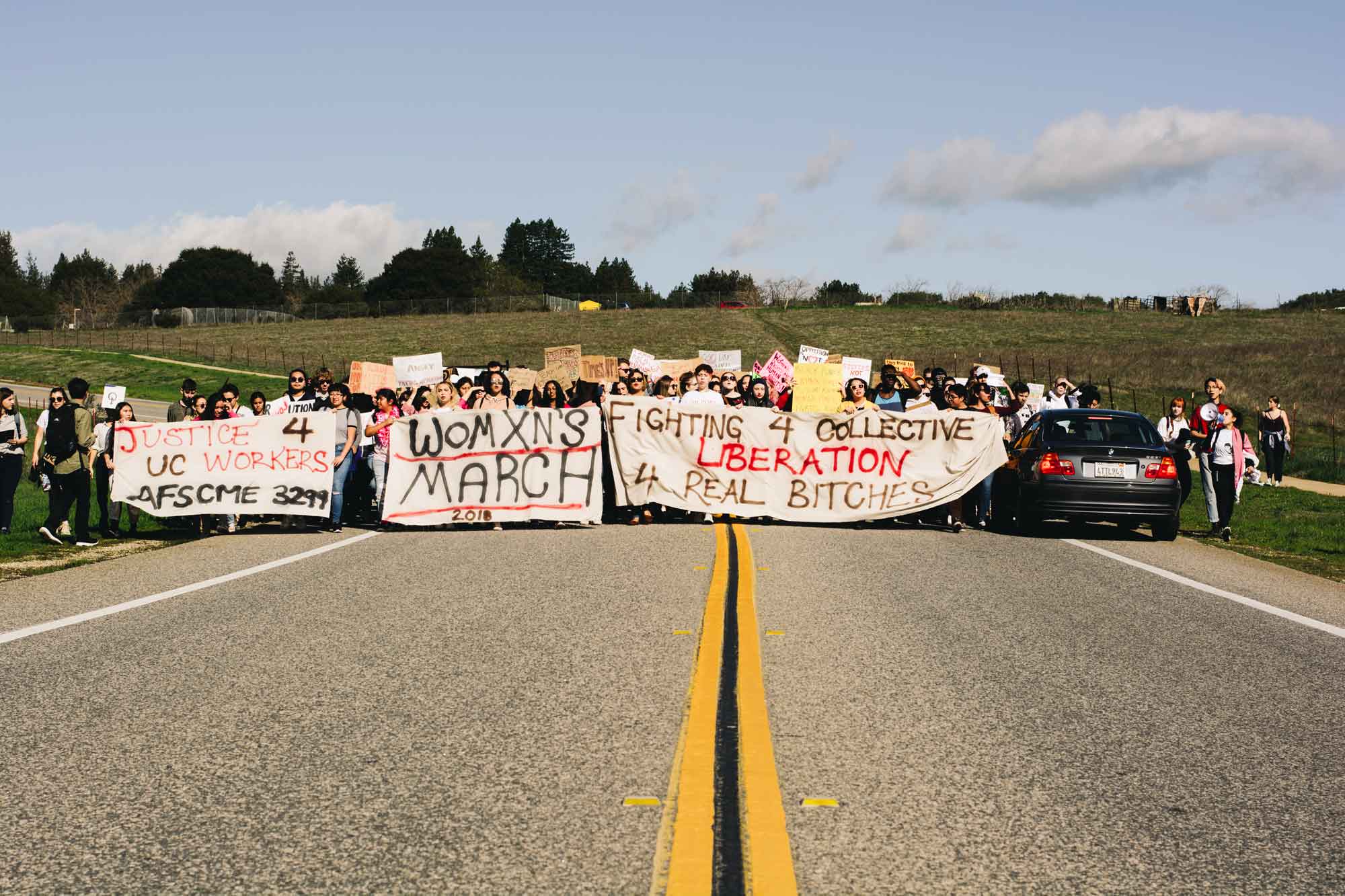 “Wake up, Oakes!” shouted a chant leader of the UC Santa Cruz Student-Led Womxn’s March on the morning of Jan. 20. “We’re here!”

Although the two marches shared similar names and sentiment, they remained separate due to differences in their approach to intersectionality.

Intersectionality, as defined by Aptheker, is “the ways in which race, class, gender [and] sexuality intersect in very complex ways to produce patterns and systems of domination.”

The Student-Led Womxn’s March specifically aimed to reflect greater intersectionality by focusing on the rights of trans womxn, womxn of color, undocumented immigrants and workers. The demonstration began in Oakes Circle, with about 35 people, and continued through campus before proceeding downtown. Over 300 people, drawn in by the students’ platform, had joined the march by the time it arrived on Pacific Avenue.

The organizers of the student-led march, Sabina Wildman and Keira Delaney, said they contacted the downtown march leadership in an attempt to unite the marches. Ultimately, they found the messages were not cohesive and it was not feasible to converge the marches. Wildman and Delaney preferred not to be directly quoted.

They stated their focus was to hold space for voices that are frequently erased in mainstream marches and to begin mobilizing students to fight for gender, racial and economic justice. Students felt the city march didn’t recognize these points, citing the lack of representation among participants. Garren Palmerin, a UCSC student, stood on the outskirts of the downtown rally.

“It shows that it is just as […] white as it was last year. I have seen no change — I have yet to see one Black Lives Matter poster — just about women and having pink pussies,” Palmerin said. “There is only one collective voice and they aren’t highlighting different issues like abolishing the prison system or having highlights on queer and trans rights.”

The city’s demonstration bore the slogan “Be the Change” to encourage community members to vote in midterm elections. The march highlighted Santa Cruz’s continued resistance toward the Trump administration, advocating for protesters to take action in today’s political climate.

“People are waking up to the fact that we have a president that is not good for the White House. He is not competent enough to be there,” said Beverly Conrique, a UCSC alumna who attended the city march.

Hawthorne stated that in respect to the separate marches, when people come together, there are going to be disagreements — however, protesters must stand together to resolve those differences.

“Santa Cruz is primarily a white culture,” Hawthorne said. “Even though we threw our arms open to everyone who wanted to be here, the reality of the situation is when you look at the percentage of people, and you bring out [25,000] people, the representation is of the people who actually live here.”

In both the city and campus marches, the underlying message is that something must change.

“We all have agency and it’s a matter of what we do with that agency. We all have an ability to make an impact on the world — it’s how we use that ability to make a positive or negative impact,” said UCSC alumna Beverly Conrique. “When we come together we are the change. Part of that is individually but the other part is getting people who are like-minded. It only works if we are all in this together.”