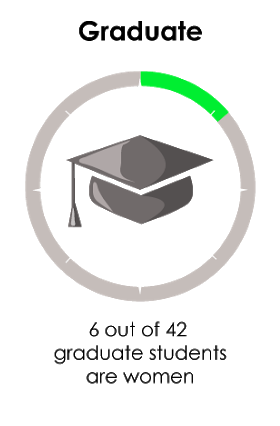 The Divide: Gender Disparities in Math

Mathematics is a gateway to all science, technology, engineering and math majors. Systemic barriers throughout U.S. education bottleneck women’s representation from the elementary to senior levels in academia.

Sitting in a Jack Baskin lecture hall for an upper-division math class at UC Santa Cruz, you might see a handful of female-presenting people — and they probably won’t be your professor or your graduate teaching assistant.

“In the math department, there is only one other woman, and that is me and Deborah Lewis. That is it,” math lecturer Nandini Bhattacharya said.

Lewis is tenured and Bhattacharya is a lecturer without security of employment. Nationwide, 15 percent of tenure track mathematic professors, positions with security of employment and other benefits, are held by women, according to the American Mathematical Society. Gender binary data was the only available data regarding demographics at UCSC and nationwide.

“It seemed like way back when, things were going to be improving relatively rapidly and instead it seems like they kind of leveled off,” Lewis said in response to the lack of female representation in the department and the country.

For Joanne Dong, third-year mathematics and physics major, a lack of representation within a field can lead to the feeling of imposter syndrome, the idea that someone doesn’t belong and their achievements are not valid. This leads to an individual feeling like an ‘imposter.’

“I think if I had Deborah or Nandini I would have been like ‘Hey look! This person who kinda looks like you can do it so you can too,’” Dong said. “I would have felt more comfortable going out of my way to ask questions or for help in general.”

As of the 2016-17 academic year, 38 percent of undergraduate mathematics majors were female at UCSC. This gap widens at the graduate level with only 6 female graduate students out of a class of 48, about 12 percent.

“I want to go into academia myself and I know that it is a very long route especially for myself, being a woman of color,” said Sandra Nair, second-year mathematics and astrophysics major. “It would be heartening if diverse faculty and changes could be implemented in future generations starting now because that would pave the path for a lot of future scientists.”

In August 2016, the Division of Physical and Biological Sciences (PBSci) laid off Bhattacharya, according to PBsci acting dean Dave Belanger. Belanger said math had too many lecturers for its department funded courses and seniority rules only allowed the last person hired by the department to be laid off.

Although Bhattacharya was hired as a math lecturer in 2007, she first started working at UCSC in the Academic Excellence Program in 1986. Her first 20 years on campus were not counted in her seniority and in PBSci’s decision to lay her off.

Bhattacharya received the Excellence in Science, Mathematics and Engineer Mentoring award in 1999, the Chancellor’s Achievement Award for Diversity in 2005 and 2013, the Excellence in Teaching Award for the 2011-12 academic year and the Hero Award by the Educational Opportunity Programs in 2016.

“If I had the kind of record I have on this campus, with teaching students and the evaluations I have, all the awards and all the recognition I have gotten from my students. If I was a white man, would they do that to me? I don’t know,” Bhattacharya said.

The Division of Student Success and Retention rehired Bhattacharya for fall 2016. Currently she works through the Hispanic Serving Institution (HSI) grants to teach enhanced Math 2 and 3 courses that promote more educational equity. These programs are meant to create a sense of belonging and enhance retention for Latinx students.

UCSC math department undergraduate population is representative of campus racial diversity, but not gender diversity. Representation goes beyond student demographics, it is about having faculty that can relate to and understand student experiences.

“I swear I have never even met any female mathematics professors here and that is a huge shame,” Sandra Nair said. “I know that Nandini Bhattacharya is a great lecturer and I met her informally, but to be honest I haven’t come across any people of color for that matter either in the math department among the faculty members, and that can be a little jarring.”

Since 2014 there has been ongoing recruitment for a lecturer with the potential for security of employment in the math department. This position listing emphasizes an ability to promote “diversity” in the department.

“We are pushing hard for diversity, that is good, definitely better to get diversity in the department,” said Deborah Lewis, who is not affiliated with recruiting. “But yet some part of me is going, ‘Well why is there more of a campaign to see that happen for a lecturer position than for a regular faculty position?’”

In November 2017, the math department opened an assistant professor position which also emphasized diversity, yet came three years after the lecturer position posting. Though this position shows interest in promoting educational equity, they both still remain unfilled.

“We have encouraged them and departments like them to work on [gender diversity], but this is a historical problem,” said acting dean Dave Belanger in response to the lack of female faculty in the math department.

Belanger said he doesn’t know of any current initiatives to increase female faculty in the math department, but other on-campus initiatives exist in the physics department.

The lack of women faculty results from disparities at the graduate level. Only 12 percent of the UCSC mathematics graduate department is female. These programs are often the minimum requirements to be a professor at any university.

In 2014, 33 percent of new hires at research institutions and non-profits were women, a 13 percent decline from 2013, meaning significantly less women are entering places of higher education and research.

Caroline Spurgin, a science education graduate student, researches how cultural formations in science classrooms give female students and students of color the impression that science and math have nothing to do with them. These formations historically erase people of color and women’s achievements from science and emphasize only the successes of white men. This is damaging to students’ identities as scientists or mathematicians.

In 2016-17 academic year, there were 56 female students majoring in math at UCSC compared to 109 male students. Gender binary data was the only available information on UCSC institutional reports.

“Having more [female faculty] would encourage more female students to remain,” Joanne Dong said. “I noticed in my intro classes there were a lot of engineers and other STEM majors, just because you need calculus for most STEM majors. So as you go on to upper divisions there are less women.”

Math classes are prerequisites for many STEM major courses and oftentimes these courses can act as gatekeepers, essentially keeping students out of STEM majors. Many entry level STEM classes are designed to be “weeder” courses, said Caroline Spurgin, science education graduate student.

Spurgin said this weeder concept is a form of elitism within STEM that privileges those who had access to rigorous math and science courses in high school, in turn excluding historically underrepresented groups and low-income communities.

“My experience in science classes all the way through college has been ‘I am not good at science,’” Spurgin said. “That, in the end, results in these structures that, in their most subtle form, give people the impression that science and math has nothing to do with them.”

Spurgin is researching how oppressive cultural formations in high school classrooms contribute to disparities throughout the sciences. In science, the successes of women and people of color get erased, she said, contributing to the idea that science does not relate to their lives, when in fact it does.

For students like Joanne Dong, who came from a smaller high school with teachers who knew her well, the university setting can already be intimidating along with the added fact that there are so few women and women of color teaching in physics and math.

“Imposter syndrome has hit me really bad this year. It is hard to feel like you belong unless you find a community,” Dong said. “It would be great if we hired more women. Math is already a really intimidating subject for a lot of people, so to have more people of color in the faculty would help encourage incoming students who already feel imposter syndrome.”