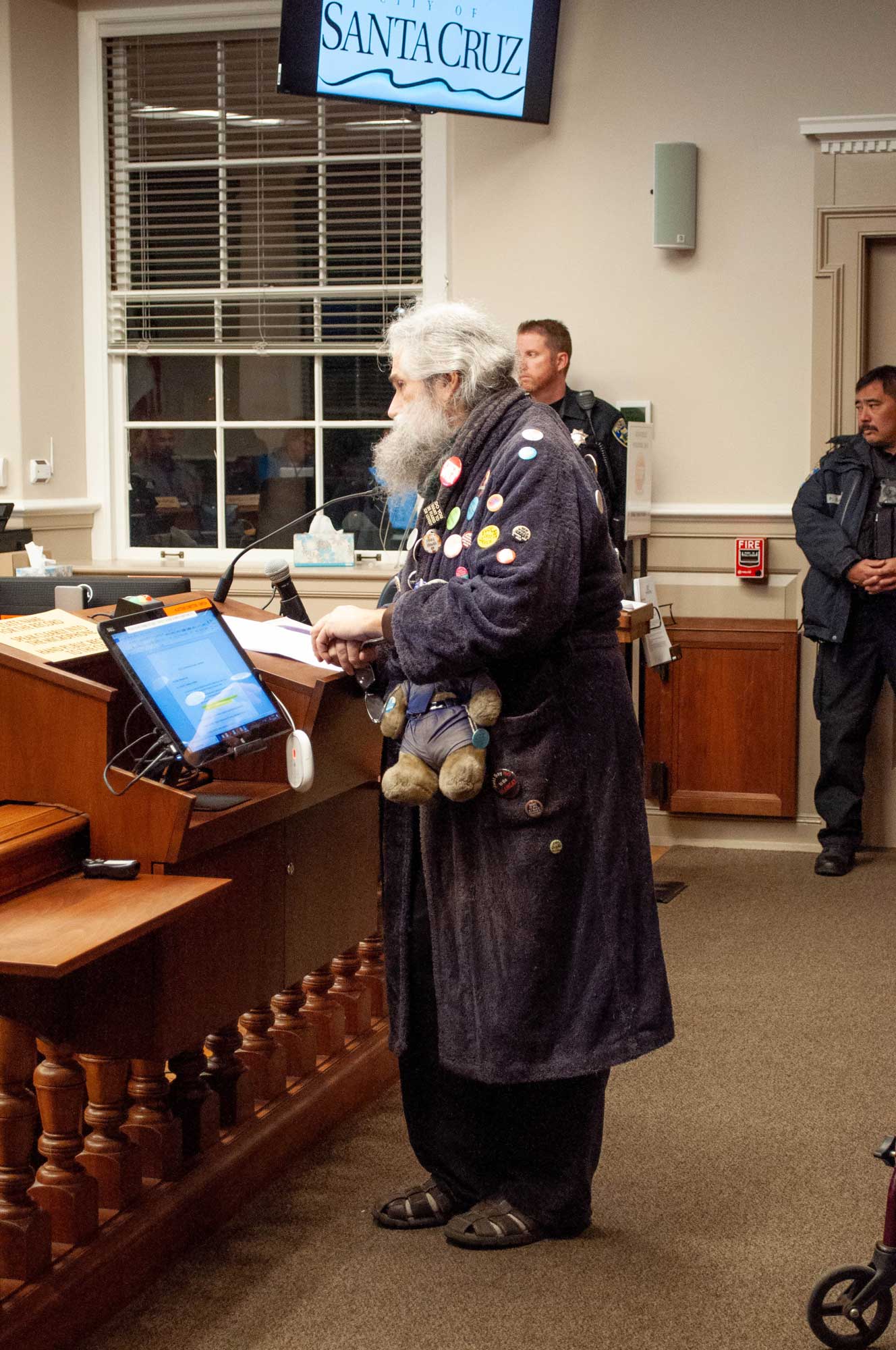 Robert Norse addresses the City Council with concerns about the lack of space for community members in the  chambers. Photo by Lluvia Moreno.
Campus

Tuesday’s contentious City Council meeting began with accusations of misinformation and sexism and ended with a vote approving a plan to vacate the current houseless camp next to Gateway Plaza on River Street.

Although the plan was passed with a 4-3 majority, it was met with strong opposition from houseless residents, houselessness advocates and other community members.

“The Action Plan, as described, is words on paper without substance,” said Santa Cruz resident and activist Robert Norse. “What is real out there tonight, the next week and the next month is the real shelter that real homeless people have provided for themselves out of sheer necessity. That’s the shelter this proposal would strip away from them.”

The plan proposes three actions to eliminate the Gateway Plaza encampment –– which has stood since November and is estimated by the city to accommodate about 200 people — and solve broader houselessness issues. The actions include creating temporary shelter sites at existing shelters throughout Santa Cruz, making plans to develop larger, permanent shelters and fully vacating the Gateway Plaza encampment by March 15.

The plan will be funded through grants provided by the California Emergency Solutions and Housing Program (CESH) and the Homeless Emergency Assistance Program (HEAP), part of former Gov. Jerry Brown’s strategy to fight houselessness.

In the Action Plan, city staff suggests several pre-existing and previously considered shelters as options for future shelters. Suggested facilities include the Salvation Army building on Laurel Street and the residential property at 1220 River St.

“Twelve months ago we were having a similar conversation,” said Santa Cruz principal management analyst Susie O’Hara. “We’re hoping in the next couple months […] to determine the feasibility of opening either an interim or permanent, year- round shelter.”

However, an alternative proposed solution could shift the outcome of the intended results of the Action Plan.

Progressive council members including Drew Glover, criticized the Action Plan as not being urgent enough to completely solve the houseless crisis in Santa Cruz. To address this, Glover worked for four weeks alongside fellow council member Chris Krohn, houseless advocacy organizations and residents living in the Gateway Plaza encampment to develop their own plan.

Although council members Glover and Krohn motioned for their plan to be scheduled for the previous City Council meeting on Jan. 22, Mayor Martine Watkins denied their motion.

Last night, the council voted to address  Glover and Krohn’s plan  for the Feb. 26 meeting. This plan includes 24-hour access to public bathrooms, the development of vehical home communities in parking lots and general decriminalization of houselessness. The decriminalization mainly includes removing sit-lie laws, which criminalize sitting or laying in public spaces.

Pleich also emphasized how helpful Glover and Krohn were working with various organizations and actual residents of the Gateway Plaza  encampment.

The lead-up to the vote to schedule the Glover-Krohn plan was riddled with conflict, personal denunciations and overall political dispute.

Friction between council member Glover and Mayor Martine Watkins began early in the evening. Mayor Watkins opened the meeting with a statement accusing council members Glover and Krohn of undermining her and the Action Plan with their own plan and claimed the two councilmen were “bullying” her because she was a woman.

“That was really disconcerting to me,” Glover said. “And then on top of that, to not allow me the opportunity to respond was really unfair.”

After reading her statement, Mayor Watkins did not allow Glover to immediately respond, citing council procedure. Glover was eventually able to respond to the allegations, but not until two hours into the meeting.

Amid heated discussions, the voices of houseless people stood out. City Hall was filled with houseless individuals detailing their personal stories and giving their opinions on the best course of action for eliminating houselessness in Santa Cruz.

Ari, who declined to provide a last name, has been houseless in Santa Cruz for the past seven years. She emphasized that council members and advocacy organizations should be focusing on other elements that worse the conditions of houseless people.

“I really want to see more job opportunities for homeless people to actually get them off of the streets instead of just giving them a place to stay,” Ari said.

Despite conflicting discussions, the prevalent sentiment remains that the relocation of Gateway Plaza encampment residents, and the Santa Cruz houselessness problem as a whole, involves more than just the City Council  members.

“It’s a community situation,” Steve Pleich said, “the whole community has to join in to create positive outcomes for homeless people.”