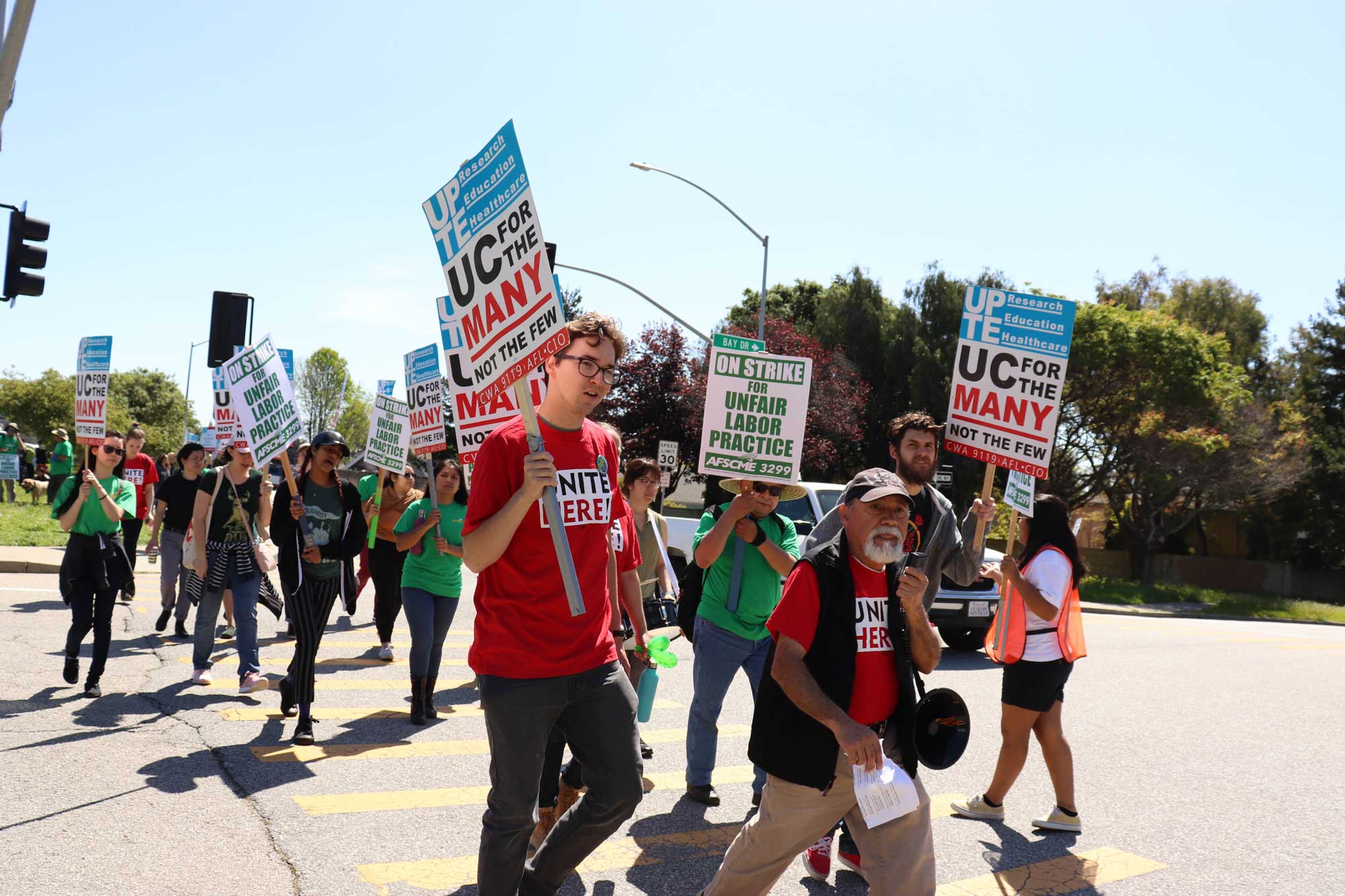 Four union strikes occurred in less than a year — but the April 10 strike was different. Rather than fighting for contractual rights, workers are fighting for rights against alleged unlawful labor practices the UC committed since the beginning of 2018.

American Federation of State, County and Municipal Employees (AFSCME) Local 3299, the UC-wide service workers union, asserts the university system has used communications, retaliatory action and intimidation tactics to ingrain fear in employees and prevent them from speaking out or striking.

“[UC leaders] send us letters with hopes of discouraging us from continuing to fight for our rights and belonging to the union,” said UC Santa Cruz dining hall worker Osmin Cruz-Garcia in Spanish. “They are trying to confuse us and suppress our voice both as a worker and as a union member.”

Beginning at 5 a.m., AFSCME 3299 workers were joined by United Professional Technical Employees-Communication Workers of America (UPTE-CWA), and other supporters to send the university system the message that they deserve fair and lawful treatment. They remained at the picket line until 6 p.m.

“Today was about something much more fundamental than wages or benefits,” said John de los Angeles, the communications director for AFSCME 3299. “Today was about whether or not workers have the right to raise issues, such as outsourcing income inequality, without fear of retaliation.”

AFSCME 3299 filed a formal case against the UC system on March 25. Union members presented a number of allegations to the state of California’s labor agency, the Public Employment Labor Relations Board (PERB), which include physical confrontation, rewards for crossing the picket line and encouraging workers to opt out of union membership.

UC Office of the President director of Media Relations Claire Doan released a statement saying that AFSCME’s charges are only an attempt to rationalize another strike. She said this was another effort to put economic pressure on the UC. Doan could not be reached for comment at time of press.

“[Research and technical] workers have already struck in support of our contract demands and AFSCME struck alongside us in sympathy,” according to an official UPTE-CWA statement. “UC is attacking that solidarity and trying to make it harder — or even impossible —  for any union to strike the university. If workers want to have any power at the bargaining table, we need to protect the right to strike, picket and protest at UC.”

Protesters shared sentiments about the UC not being above the law.

“We want to bring attention to the case that was filed, that’s why we’re striking today,” said Kevin Parks, UCSC bus driver and AFSCME 3299 bargainer. “If we had just turned a blind eye after filling the case, that doesn’t do justice to the individual workers that have been retaliated against.”

Many UCSC students felt outraged when they heard of the union’s allegations of intimidation  and chose to picket in solidarity with UC workers. Workers Student Solidarity Coalition (WSSC) organized alongside AFSCME 3299.

“We are fighting for justice, human rights, treating people as they should be treated,” said WSSC member and third-year Missy Hart. “The UC should not be able to use their corporate power to threaten them or intimidate [union members].”

While many reaffirmed a fair contract’s importance, union members and supporters agreed they must tackle the infringement on fundamental rights first.

Union rights are protected by Section 7 of the National Labor Relations Act. Under this section, workers are entitled to participate in a union, organize other employees to support the union, circulate petitions and more.

“Workers keep the UCs running,” Hart said. “It’s only right that we are out here in solidarity, standing and fighting for justice […]. We need to bring attention to the lawsuit that was brought against the UC because of that. We’re not going to stop until the UC starts treating us all as human beings.”

Many students standing in solidarity expressed disappointment in the number of students present at the protest.

While gratitude in the dining halls is nice, standing in solidarity shows much more for the immense effort the workers give to keep the campus running, Hart and Muñoz said.

“I love the work, I love what I do,” said dining hall employee Osmin Cruz-Garcia in Spanish. “Above all, I love providing good service to the students.”

While most of the events of the day played out peacefully, there were a few minor incidents. UCSC Police Chief Oweis said around 11 a.m. protestors were able to make all the traffic lights flash at the West Entrance which took 45 minutes to resolve.

At the base of campus, UCSC alumna Angela Tulio, was arrested on charges of allegedly blocking a roadway, failing to obey a police officer and delaying or obstructing an officer, Oweis said.

“I don’t think things like [the arrest] should happen,” said College Nine senior custodian Nicolas Gutierrez. “We always aim for peaceful protests, we don’t want any harm to come to students. We thank the students for their support.”

There were no further incidents during later strike activities.

Hopes for the future

Despite this strike not focusing on contract agreements, AFSCME 3299 workers made it clear they had been waiting for a fair contract for almost two years. While they hope to bring attention to the UC for alleged unlawful labor practices, they also want to continue to push the UC toward a fair contract.

In the case filed against the UC, AFSCME 3299 focuses on recent examples of alleged labor law violations — but notes allegations date as far back as Feb. 2018. Some of the most extreme incidents reported include a UC Davis manager allegedly charging his vehicle at picketers during a protest. During that same protest, UC police allegedly threw a protester to the ground to arrest him.

AFSCME 3299 workers insist their demands are not out of line. They explained all they want is to feel comfortable at work.

“The bottom line is, if you have happy workers coming to campus every day, it’ll reflect on students’ lives,” Gutierrez said. “If we’re treated with respect and we have decent wages and decent benefits, it will make us work harder for the university, and mainly, the students.”

Gillian is the co-editor-in-chief of City on a Hill Press. Previously, she worked as the campus desk editor as well as a campus and CHPNow reporter.