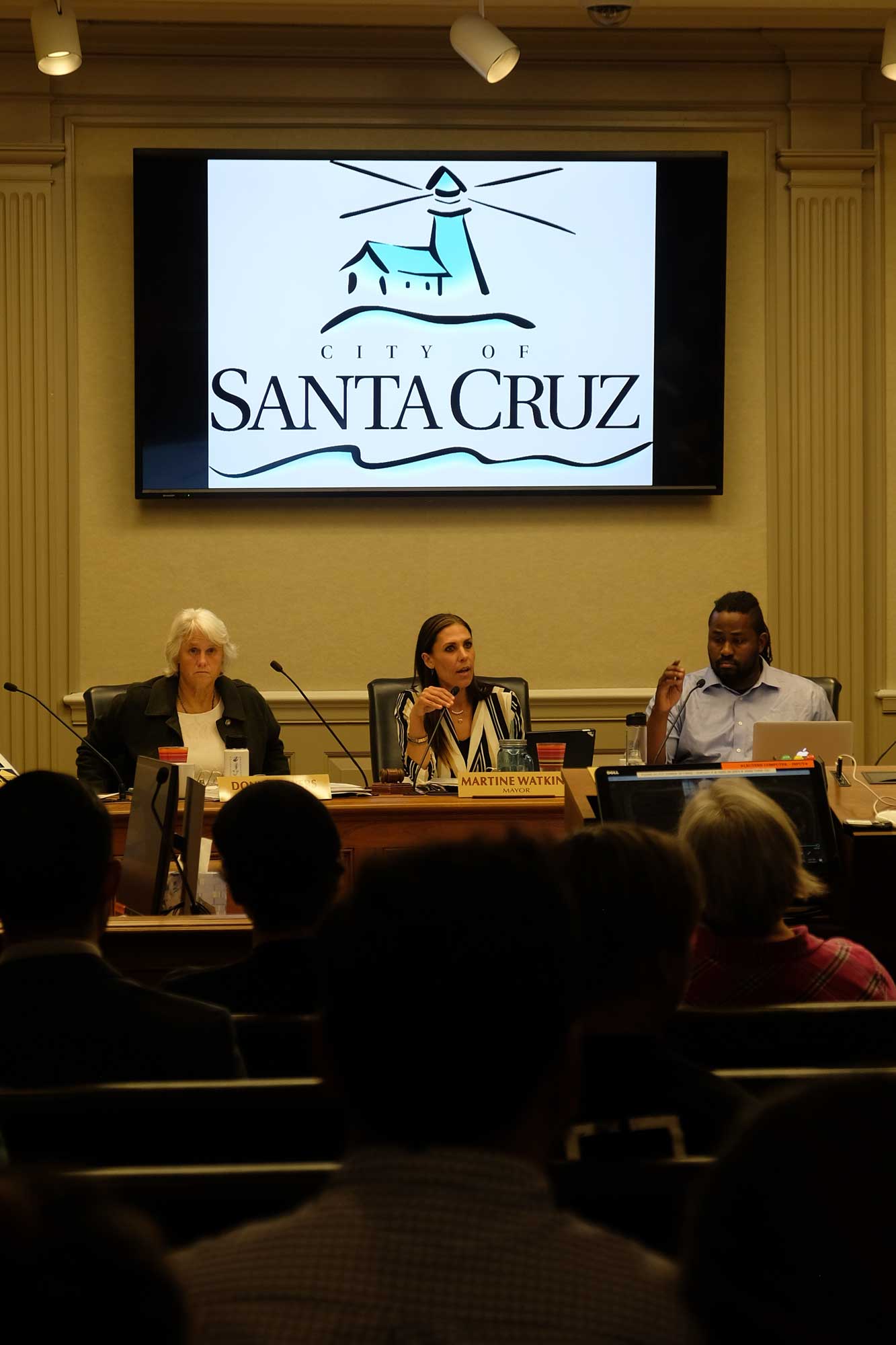 After over a month of flip-flopping on what to do with the houseless encampment behind Gateway Plaza, sometimes called the Ross encampment, the Santa Cruz City Council rejected a plan to close the camp. Council members Cynthia Mathews and Donna Meyers and Mayor Martine Watkins co-sponsored the plan.

Watkins, Mathews and Meyers voted in favor while Vice Mayor Justin Cummings and council members Sandy Brown, Chris Krohn and Drew Glover opposed. The council then approved 4-3 an alternative proposal brought forth by Brown and Cummings, which calls for a camp clean-up and an interim management program similar to the one operated at 1220 River St. Independent of the two plans, the council unanimously voted to rescind approval of Parking Lot 24 at 251 Washington St. as a safe sleeping zone.

“The objective of this is to mitigate the public health and safety concern while we explore trying to provide alternatives and get these alternatives online and dealing with the legal constraints,” Cummings said. “I am not trying to turn [Gateway Plaza] into a permanent transitional encampment.”

In the past five months of the camp’s existence, three living structures were destroyed by fire, there have been 59 calls for medical service and four camp residents have died, one as recently as Monday. The fate of the camp and its residents was the focus of a fierce debate after being declared a public health and public safety hazard by Santa Cruz Public Health Officer Dr. Arnold Leff and Santa Cruz Fire Chief Jason Hajduk.

The plan also provides increased services to the Gateway site in the interim, such as clean-ups, additional sanitation infrastructure and delineated sleeping spaces. The city, per a condition of the plan, will not consider siting new houseless encampments in city parks or residential neighborhoods. While the Gateway site will not yet be permanently closed, clean-up efforts will require temporary displacement from the area.

“I was told by [the city] that any cleanup would actually be done with the Ross camp people where they are,” said houseless resident and camp liaison Alicia Kuhl, “and that everybody there would be able to stay where they are and work together to address health and safety issues. […] Only recently has it been proposed that everybody needs to leave to get that done.”

City Council was particularly concerned with ensuring its plans were constitutional under the 9th Circuit Court of Appeals’ recent ruling in Martin v. City of Boise. The court held that laws punishing the houseless for sleeping or lying in public places violates the Eighth Amendment protection against cruel and unusual punishment because they criminalize an involuntary and unavoidable state of being.

Santa Cruz has no permanent shelter spaces, with all available beds being conditional or temporary. As the 9th Circuit stated in Martin, the presence of empty shelter beds in a community does not inherently mean that shelter is available or accessible.

The Council received a letter this week from the American Civil Liberties Union (ACLU) and the National Law Center on Homelessness and Poverty (NLCHP), said City Attorney Tony Condotti.

The letter from the ACLU and the NLCHP alleges that more than 200 residents live in the Gateway Plaza encampment and implicitly threatens to sue the city should the camp be closed without suitable alternatives. Condotti also said some residents of the camp sued the city and filed a preliminary motion for declaratory relief asking the Superior Court of Santa Cruz County to prevent the city from closing the Gateway Plaza camp.

Although Santa Cruz Municipal Code Chapter 6.36, also known as the “camping ban,” has not been officially enforced by Santa Cruz Police Department since 2017, some houseless residents claim that they are still being cited for such offenses.

“It’s really sad that in our progressive community of Santa Cruz, it took a federal ruling for us to not kick people out when they’re sleeping on the streets,” said UC Santa Cruz alumnus and Santa Cruz resident Faisal Fazilat. “Let’s not forget these people are disproportionately disadvantaged by a system that continues to criminalize them. The moment you don’t have a house and you don’t have resources […] you will be looked on as a criminal forever.”

Despite the camp not facing a formal closure date, many houseless residents are wary of putting their trust in the city.

“We don’t trust [the city], at this point, to make the right decision,” said houseless resident and camp liaison Alicia Kuhl. “We’re a little leery about the way things have been going. One thing’s proposed one week, it’s taken off the table the next week. We still have people out there who are concerned, they have anxiety.”