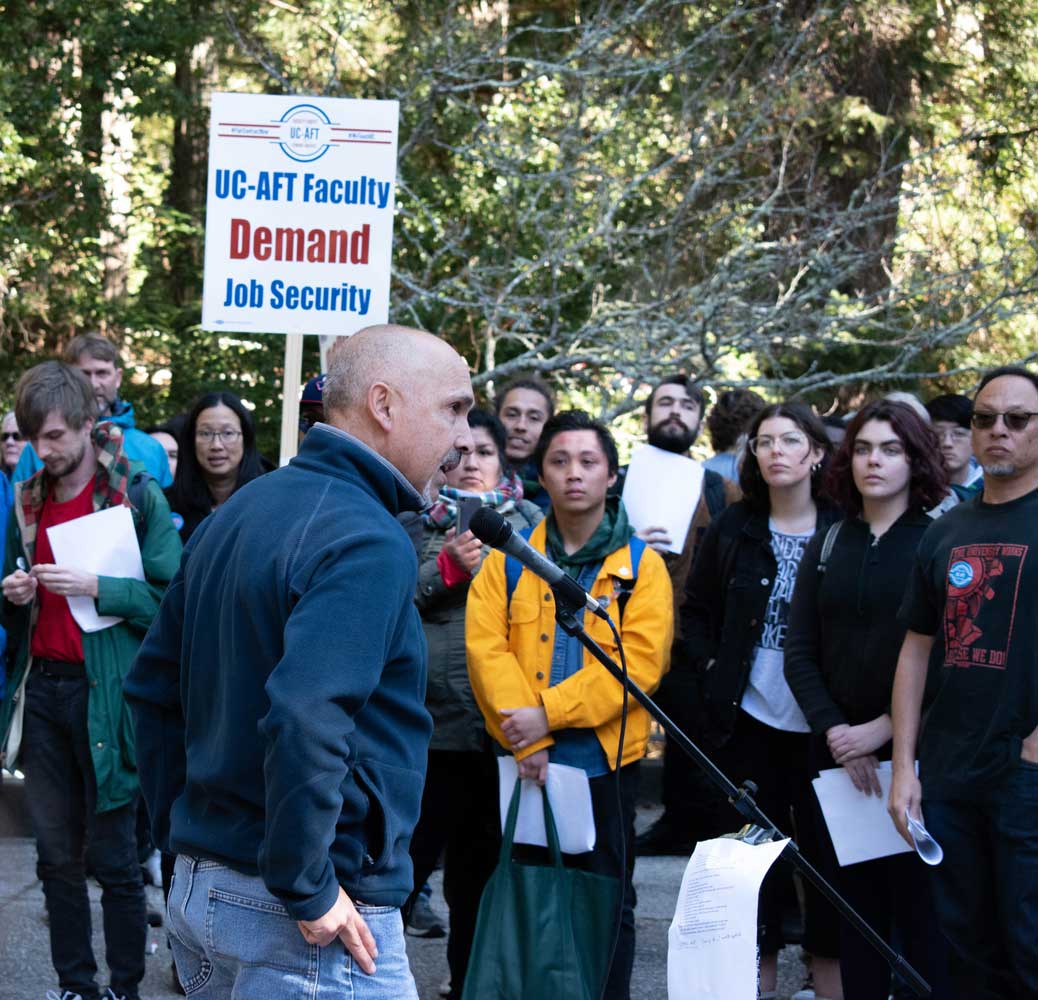 Seventeen years later, over 100 UCSC lecturers, graduate students and supporters marched to Kerr Hall on Feb. 3 calling for a fair contract. For Roxi Power, a lecturer in the writing program, the march felt like déjà vu.

“I’m tired of this,” Power said. “I’ve been here for 21 years. I did this before, and I’m still talking about respect. Lecturers need to be respected.”

After more than nine months of stagnant negotiations with the UC Office of the President (UCOP), University Council-American Federation of Teachers (UC-AFT) representatives voted to let their contract with the UC expire on Jan. 31.

With the contract expiration, the UC and lecturers have entered a “period of status quo,” meaning all aspects of the expired contract will remain in effect. Lecturers will continue to hold class, receive merit and excellence reviews and receive their salaries.

“The UC as an institution has a responsibility not just to be an engine of economic and social mobility for students, but it is also responsible for ensuring that it’s employing its workers in a way that people can stay in the middle class,” said UC-AFT President and UC Los Angeles lecturer Mia McIver.

The UC presented a “take-it-or-leave-it” package proposal in which all articles had to be accepted by the union by Jan. 30, a day before the contract was set to expire. However, McIver said the package proposal was incomplete.

“Let’s say that I agree in 2019 to teach a seminar in 2021,” said Bruce Thompson, a lecturer in the history and literature departments. “But the enrollment for seminars fluctuates and the number can go from 22 to somewhere in the single digits. So let’s say for example, that I get nine [students] instead of 10, and UC declares that 10 is the bare minimum. So with 14 days notice I suffer the loss of a class and the loss of one-eighth of my income for the year.”

On Jan. 30, the day before the expiration of the UC-AFT contract, lecturers at several UC campuses received an email from Executive Director of Systemwide Labor Relations Peter Chester addressed “Dear Colleague.” The email briefly discussed UCOP proposals and did not address UC-AFT proposals.

“Negotiations began in April, and the UC-AFT has not presented UC with a single compensation proposal, nor proposals on other topics the union has stated an interest in bargaining over,” Chester said in the email. “By contrast, UC has presented the union with a comprehensive proposal designed to bring the negotiations to a timely resolution and recognize the importance of your role with fair and appropriate compensation, benefits, position responsibilities, professional development and performance evaluation.”

In addition to the proposals UC-AFT presented in the past nine months of negotiations, the union offered a counter proposal in which they would extend their current contract with the guarantee that bargaining would continue.

According to McIver, UCOP negotiators indicated that the completion of the package proposal was their top priority at this time, and were unavailable to answer the union’s questions regarding UCOP’s proposals.

“After more than nine months of negotiations, on the day before our contract expired, UC admin gave us an incomplete, take-it-or-leave-it, bundle of articles with little to no movement,” UC-AFT representatives said in statement. “We have a message for Peter Chester: Propaganda will not work on our members because we know that solidarity defeats precarity!”

Lecturers are optimistic that negotiations will continue between UC-AFT and UCOP. While they continue to fight for a contract, lecturers will still meet with students in office hours, write letters of recommendation and sponsor student groups and initiatives.

“I can tell you who is doing the real work for student success,” said UCSC writing program lecturer Roxi Power. “It’s the people on the front lines, it’s the lecturers. I’m meeting around the clock every week with my students, going over their sentences with them in their papers. [Students] are not abstractions to me, I spend my life with them.”

Haneen is one of the Editors-in-Chief of City on a Hill Press. She is a fourth year Politics major. She began her journey with City on a Hill as a Fact Checker in Fall of 2018. She went on to become Fact Lead in Winter of 2019 and then City News Editor from Fall 2019 through Spring 2020.