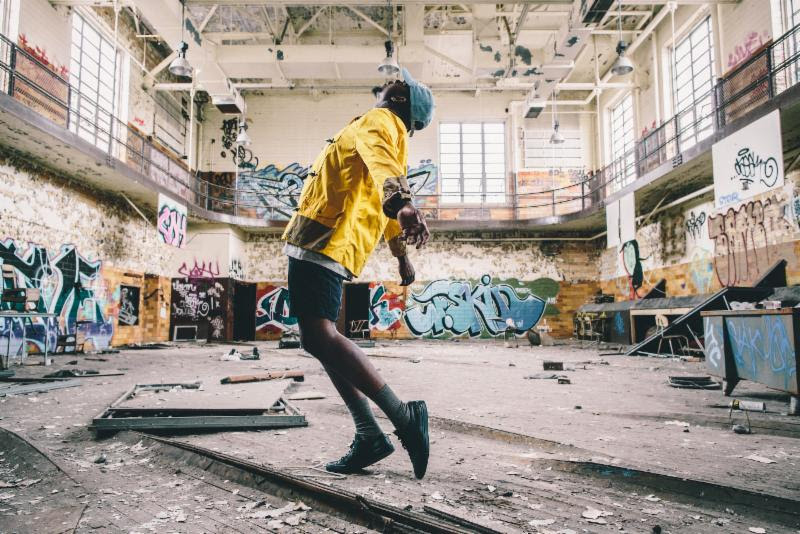 Jenkins released his third mixtape “Trees & Truths” in 2013, which garnered widespread attention due to its bold lyrical content with lines like, “Fingers bleeding like I’m picking cotton/Fresh jazz, but I spit it rotten.” Later that year, the Chicago native collaborated with Chance The Rapper and Vic Mensa on the single, “Crossroads.” Two years later, he is approaching the European leg of his 2015 tour.

To get the ball rolling, French DJ STWO hyped up the crowd with remixes of tracks by well-known rappers Kendrick Lamar and Drake. A group called The Mind followed, feeding off of the crowd’s youthful energy with electronic R&B. The group consisted of three charismatic men rocking bomber jackets and bandanas who laid down funky beats alongside smooth jazz vocals. “It’s stupid lit in here,” the singer said with a satisfied smirk in response to the boisterous audience. jSTOCK, another performer on the tour, joined them on stage soon afterward, wearing a bucket hat that barely contained his long dreadlocks.

During his set, jSTOCK mentioned FreeNation, a hip-hop group he and Jenkins are both part of. The group aims to promote free thought and unrestricted creativity. jSTOCK addressed the deep-seated racial injustices artists of color face through his own personal struggles. The rapper opened up about his run-ins with the law and recidivism, and urged individuals not to “judge people in a season.”

Jenkins took the stage close to 11 p.m., and the audience erupted as he started his set. The opening artists remained and performed alongside him, although Jenkins took center stage. With his laidback and warm demeanor, he made a sincere connection with the Atrium’s audience members.

“Drink more water,” Jenkins shouted at the sea of fans as they rallied along with him. “Find the truth for yourself.” Hands shot up from the audience, raising their water bottles in response to his words. It didn’t take long to realize he was likening water to knowledge. The audience’s eyes were glued to Jenkins as he weighed the importance of finding truth without the influence of an unreliable mainstream media. “Don’t just read titles and repost,” he warned, referring to the youth generation’s tendency to immediately share ideas through social media outlets without a credible source.

Jenkins played a spread of tracks from different albums, including 2015’s Wave[s] and The Water[s], released last year. The crowd was hypnotized by Jenkins — he was their messiah. Billows of smoke rose from the crowd, and energy pulsed with every bassline. He threw up both middle fingers, shouting “Power to the people, middle finger to the popo,” but despite this, his focus extended beyond animosity for power structures. He urged the crowd, comprised mostly of teens and young adults, to take on challenges and push through times of discomfort and adversity. “Dreams, goals, and success lay outside of our comfort zone,” he said. “Small victories form a bigger picture.”

Before he performed his 2014 single “Martyrs,” he asked the audience if they’d seen the music video for the song, which features Jenkins hanging by a noose in a barren forest. It samples Billie Holiday’s “Strange Fruit,” and depicts a chilling culture of lynching and other acts of violence perpetuated against black men and women. Nooses are worn like neckties by every character in the video, and lifeless feet sway in the foreground of the frame. He ties this history of injustice to the events of Ferguson as a recent example. During the show, he framed this history by repeating his mantra again and again throughout the show — “Drink your own water” — as a reminder to seek knowledge free of external influence.

Jenkins preaches with a keen and personal awareness of contemporary social issues, and as a rising force in the hip-hop community, his message has the potential to ripple out to millions of new listeners. His performance last Wednesday solidified his popularity and impact as an artist working on a deeper level of personal craft and interaction. He’s not only on his way to Europe to continue his tour later this month — he’s also on his way to a new degree of success.