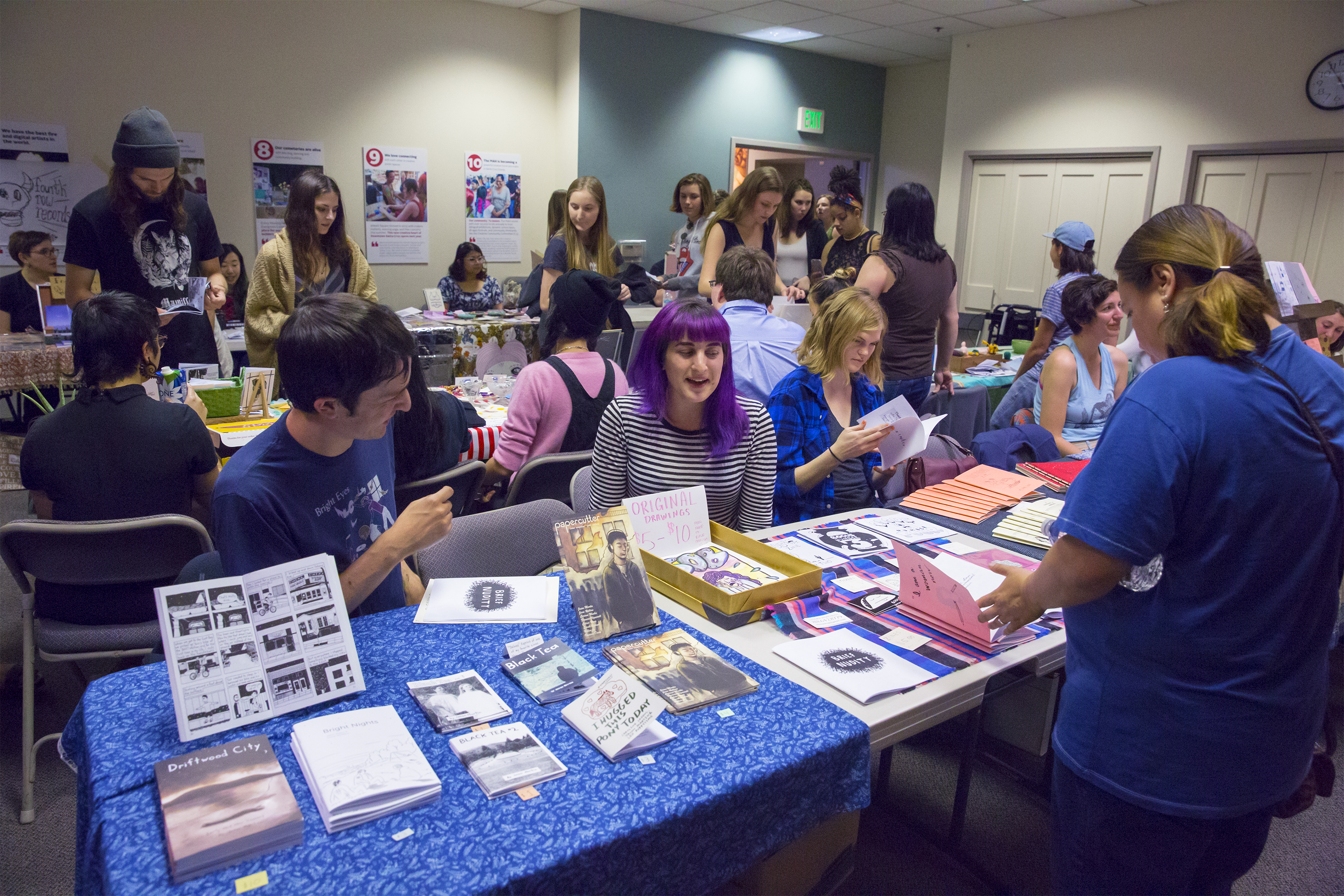 Last Saturday the MAH hosted the first student- produced Santa Cruz Zine Fest, which showcased dozens of local artists, musicians and writers. The fest provided a venue for artists to sell their original artwork and network with other community members. Photo by Casey Amaral
ARTS & CULTURE

Flowers and fragments of faces were sketched in muted colors with charcoal and overlaid with text. In the mini narrative, artist Jasmine Guerra likens herself to a garden of flowers. Although some are wilting, they still make up the garden, just as her flaws do.

“Their petals pregnant with details from a nonexistent reality. Their stems stab at the walls of the interior of my skull. They have taken me. I am a walking garden,” read lines from Guerra’s zine “Flowers.”

The event continued until 8 p.m. with hundreds of people passing through the Santa Cruz Museum of Art and History (MAH). They jumped from booth to booth, bartering and purchasing work and jamming to live music. Older folks strolled through, smiling at the familiarity of zines and expressing their nostalgia for zine making in past decades.

A zine is a self-published collection of text and images in the form of a booklet, usually photocopied and sometimes printed by hand. The small hand-made magazine contains all types of content. Through this liberated form, it’s able to exert powerful messages against methodical structures.

Zine Fest organizer and UC Santa Cruz student Jack Wolcott aimed to start a dialogue, create a safer space for those systematically othered in the community and learn together. The Zine Fest and zine making in general is a space for community building.

“I’m tired of people thinking that Santa Cruz is this ‘safe’ place. It’s not — technically nowhere is — but often people approach Santa Cruz as this liberal heaven,” Wolcott said, noting many of his friends have experienced identity-based harassment in Santa Cruz. “However, I found my little corner of radical folks where we hang out and dream about smashing the state together.”

Talent from different communities, both Santa Cruz and beyond, could be found among the 56 tables of showcased work. Poetry within the zines housed discussions that challenged the interchangeability of sex and gender roles.

“Right from the start, I knew we were doomed, the way we were dressed up, and boxed up and groomed,” read “A Very Good Place to Start,” a poem by Chrissann McCann. “Really it’s not a radical thought, that for us to be US is to be WHO WE OUGHT!”

Wolcott described the fest’s function like a public art piece, reaching out and interacting with people.

“I’m really into the DIY community, and it’s way more important than the institutions that have been placed upon it,” Wolcott said. “Do what you can if you have the ability to do it.”

Underground movements like Riot Grrrl in the ‘90s utilized zines to channel feminist empowerment and politics. The artistic rebels of Dada, an avant-garde art movement that mocked materialism and nationalism, also turned to self publishing –– even Benjamin Franklin used a zine to create booklets of his recorded ideas with a printing press. This way of compiling and communicating ideas has developed into a multifaceted form of expression, containing anything from poetry to illustrations to photography.

Around the MAH, illustrations, prints, t-shirts and chapbooks accompanied displays of zines. A table of chapbooks — small booklets containing poetry that follow the same format of a zine without images — held collections of poems from the community.

In this case, they were submitted anonymously. The concept was birthed by UCSC alumna and former Kinetic Poetics Project member Jacqueline Grohs, who was curious about the different content that could be produced when given the option to remain anonymous in published work.

SubRosa Community Space displayed collections from its zine library including “handbooks” suggesting alternative, DIY approaches to health and self care, while other zines were filled with collaged pages and phrases like “Girls just wanna have fundamental rights” and “My little black dress does not mean yes.” The appropriated mainstream lines had a clever twist, challenging patriarchal attitudes.

Zine creator and Hurricane Katrina refugee Lucia Borrello talked about living in a Florida hotel room for months and told stories from the catastrophe that inspired her to express herself through zine making. “A lot of my work is trying to deal with all the things that sit with me in a bad way,” Borrello said.

Borrello displayed zines created via typewriter in collaboration with students from the elementary school she teaches at in Chico. Adorable misspelled words and kooky answers filled a zine titled “Stooped People.”

For artist Alicia Dornadic, who tabled at the event, collaborating on zines yields an exciting result. She created a zine called “Growing Up Half Assyrian” with her sister. Dornadic described every zine as an experimentation, despite the number of people who purchase her work. The format is easily accessible, and requires cheap material like paper, assorted drawing materials and image cut-outs.

“There’s a low barrier to entry,” Dornadic said. “If you can photocopy and staple, you have a voice.”