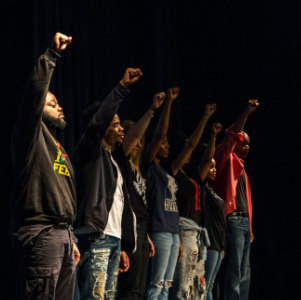 Peripeteia. A sudden change in circumstances.

The turn in your stomach when watching footage of police brutality toward Black people — Alton Sterling, Sandra Bland, Trayvon Martin — brought new meaning to this word.

Minority Report opened with footage from the 1991 Rodney King beating that preluded the Los Angeles riots and a monologue by director Scott St. Patrick. “Open your eyes and do the right thing,“ St. Patrick said.

Directed and written by St. Patrick, the show consisted of eight vignette performances addressing the historical and modern Black experience. Actors interacted with the audience through conversational pieces. They further engaged the crowd with famous footage from media and interviews pertaining to the Black community in the U.S.

About 150 members of the UC Santa Cruz community attended the performance at the Stevenson Event Center on April 22. The audience participated in a facilitated discussion afterward to address issues of representation and education at the university level.

“A lot of issues definitely have historical and contemporary context that are never too old or too late to talk about because there are always stories that we are not exposed to,” said third-year theater arts major and discussion facilitator Maimouna Camara. “This type of exposure was raw and authentic in this production.”

This play was the second of its kind presented by Student Organizing Leadership Body (SOLB), Student Organization Advising and Resources and Student Media, Cultural Arts and Diversity (SOMeCA) with funding from the California State Legislature and the UC Office of the President.

The primarily Black cast performed vignettes focused around events including the murder of Emmett Till (1955), the foundation of the Mississippi Democratic Freedom Party (1964) and one of the largest acts of racial violence in U.S. history in Tulsa, Oklahoma (1921).

“In passing you hear names like Ella Baker, Fannie Lou Hamer, but you don’t really know,” actress Kelly Jenrette said. “There is so much that we need to be taught outside of the norm, I think this [performance] takes us out of the norm. Let’s talk about Tulsa, let’s really talk about Emmett Till and that jury.”

To demonstrate the institutional racism that continues to affect the Black community in the U.S., recent instances of police brutality were projected onto the stage. These included the situations involving Sandra Bland, Alton Sterling and Philando Castile. St. Patrick’s purpose was to bring awareness to people who have been killed and to parallel these violent events to the history of the Black experience in America.

“For people to get the chance to actually see Sandra Bland or to hear the name of Tamir Rice, I just feel like that brings justice in an educational way,” St. Patrick said.

St. Patrick chose examples he thought would be effective in a university, but the media clips alternate depending on the venue. The cast commented on the role of social media and recorded videos in spreading awareness of acts of brutality, which influenced his choice of visual medium.

The last three vignettes pertained to the modern Black experience including love, interracial relationships and the tragedy of Hurricane Katrina. For the most part, these pieces were well-received by the audience. But many, including discussion facilitator Maimouna Camara, held their own critiques.

“One of the showcases had a white woman, and she told a narrative about being in an interracial marriage. It was really aggressive and it provided a perspective that I don’t think was necessary,” Camara said.

The vignette Camara is referring to was written by St. Patrick with an intent to evoke the feeling of aggression.

After the performance, the audience moved into facilitated discussion led by members of SOMeCA and SOLB. Topics of discussion included how these issues pertained to the university and how impactful the mediums of expression were.

“The show explored separate issues in the form of monologues, which were interactive with the audience, which I thought was great because that was another mode of communication and connection that they were trying to teach in the production,” Camara said.

The discussions addressed issues from the performance that are present at UC Santa Cruz — two percent of the campus community identifies as Black. With the lack of representation, there is a call to educate the campus community on cultural oppression and institutionalized racism.

The director and cast intended for this performance to open conversations around race and the treatment of underrepresented groups in the U.S. Actor Marcuis Harris hopes the audience walks away having gained a new perspective and learned about events not taught in school.

“There is power in the content and we really are affecting change,” Harris said. “Changing minds by changing the narrative.”